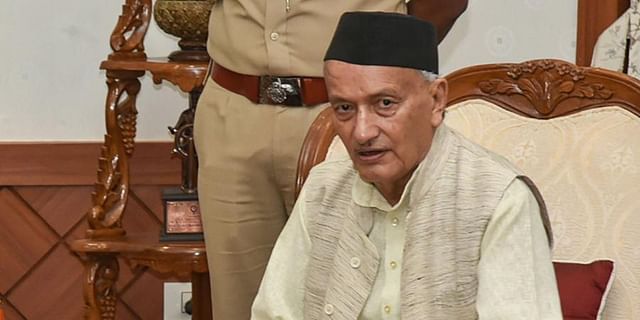 MUMBAI: After a huge uproar over recent remarks about Shivaji Maharaj by Maharashtra governor Bhagat Singh Koshyari, he has been called to Delhi. The remarks have sparked a massive furore and has drawn censure from Maratha organisations and Opposition leaders alike.

Sources said that the top BJP leadership is not happy with the Maharashtra Governor for stirring controversy. “The Governor will be either rebuked or he may be shifted to a smaller state. The Governor is giving issues on a platter to the Opposition through his controversial statements against the state heroes and icons. Some concrete decisions are likely to be taken over it,” said the source, requesting anonymity.

On the other hand, the Opposition upped the ante against the Governor and the BJP.

Uddhav Thackeray, on Thursday, appealed to the Opposition including BJP workers, that those who care about Maharashtra should come together against the Governor's "derogatory remarks" against Chhatrapati Shivaji Maharaj.

Shiv Sena workers protest against Maharashtra Governor Bhagat Singh Koshyari over his remarks on Chhatrapati Shivaji Maharaj, in Pune. (Photo | PTI)
Thackeray said that the time has come to send back the "BJP-led central government’s parcel" (Bhagat Singh Koshyari) who "continues to denigrate and insult their icons and heroes by making deliberate statements."

Thackeray alleged that there must be someone or some ideology behind "this rotten brain" who is "defaming" icons like Chhatrapati Shivaji Maharaj, Savitri Bai Phule, and Mahatma Phule.

“BJP is only defending and protecting Koshyari. Koshyari’s real place is in the senior citizen asylum, not the governor's house. Now, the time has come to send parcels back via Amazon,” Thackeray said.

He added that a Maharashtra bandh would be carried out if the Governor was not removed soon.

NCP chief Sharad Pawar said that Bhagat Singh Koshyari was not making such a statement for the first time. “Koshyari is habitual of making such statements against our heroes. Is it a deliberate attempt to denigrate our heroes? Now, the Prime Minister and President of India have to take a call over him to continue as governor of Maharashtra,” Pawar said.

Udayan Raje Bhosale, BJP Rajya Sabha member and direct descendant of Chhatrapati Shivaji Maharaj demanded the immediate removal of Koshyari and BJP spokesperson Sudhanshu Trivedi from their respective posts. While Koshyari is facing flak for calling the founder of the Maratha Empire an icon of olden times, Trivedi allegedly said that Shivaji Maharaj had apologised to Mughal Emperor Aurangzeb.

“I will not tolerate anything against Chatrapati Shivaji Maharaj. Shivaji Maharaj never surrendered before anyone as the BJP spokesperson claimed. In fact, all were surrendering before Aurangzeb, but Shivaji Maharaj was the only who fought against him and protected the Maratha empire,” Bhosale said.

Gadkari and Pawar should have objected to Koshyari's remarks then and there during the event in Aurangabad on November 20, the Rajya Sabha MP added.

"The concept of modern India was put forth by Chhatrapati Shivaji Maharaj. He was the inspiration for freedom fighters like Bhagat Singh, Krantisinh Nana Patil, Netaji Subhash Chandra Bose, Chhatrapati Shahu Maharaj, Mahatma Jyotiba Phule and Dr Ambedkar. And now these people say the thoughts of Shivaji Maharaj have become old," he said.

Meanwhile, Deputy chief minister Devendra Fadnavis said that the Opposition is politicizing the issue. Governor has already clarified his stand, he had no intentions to hurt anyone, he added.

In the past, Koshyari's remarks about the social reformer couple Jyotirao Phule and Savitribai Phule had created a controversy.
(THE NEW INDIAN EXPRESS)