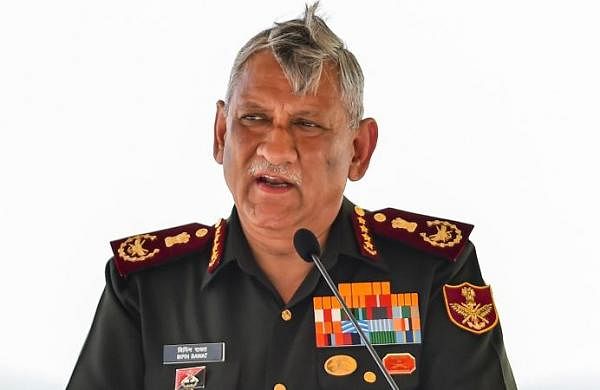 Chief of Defence Staff General Bipin Rawat and his wife Madhulika Rawat have been killed along with 12 others when the Army chopper they were flying in crashed near Coonoor in Tamil Nadu, the IAF confirmed on Wednesday.

The tragic incident happened when the chopper was heading for Wellington from Sulur.

Group Captain Varun Singh SC, Directing Staff at DSSC, who was also on board, is currently undergoing treatment at Military Hospital, Wellington, said the IAF.

The IAF has ordered an inquiry into the accident.

An IAF Mi-17V5 helicopter, with CDS Gen Bipin Rawat on board, met with an accident today near Coonoor, Tamil Nadu.
An Inquiry has been ordered to ascertain the cause of the accident.

Fire Service personnel and local people helped in the rescue operations which was a difficult one as the site of the accident is narrow and didn't allow for movement in large numbers, Ramachandran said.

An #IndianArmy helicopter carrying senior defence officers including Chief of Defence Staff General #BipinRawat crashed near #Coonoor in the nearby hilly Nilgiris district on Wednesday. pic.twitter.com/IQqj9t51m9

The chopper was on its way from the Sulur IAF base to the Defence Services College (DSC) at Wellington when it crashed. The mishap happened at Nanjappanchathiram area amid heavy mist and early visuals showed the helicopter in flames.

General Rawat, 63, the first Chief of Defence Staff, was an alumnus of St. Edward School, Shimla and the National Defence Academy. He assumed office as the Chief of the Army Staff on 31 Dec 2016 and was elevated to his current role on January 1, 2020.

He had boarded an Embraer jet at Delhi at 8:47 am, and landed at Sulur at 11:34 am. He then got on board the MI 17 V5 helicopter at 11:48 am. At 12:22 pm, Air Traffic Control said contact had been lost, according to sources. The Chief of Defence Staff was slated to deliver a lecture at the Staff College.

Defence Minister Rajnath Singh earlier met Prime Minister Narendra Modi and briefed him about the accident. He also paid a visit to General Rawat's residence. The Air Force Chief Air Chief Marshal VR Chaudhari has been asked to head to the accident site.