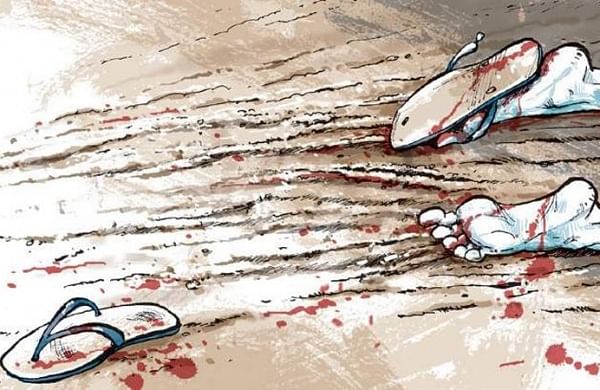 MUMBAI: The Maharashtra CID's chargesheet in the Palghar lynching case in which two monks and their driver were beaten to death by a mob three months ago, says that the incident was a fallout of rumours that child-lifting gangs were operating in the area whose members posed as seers or uniformed personnel like policemen, an official said.

The Criminal Investigation Department (CID) on Wednesday filed the chargesheets, one running into 4,955 pages and another of 5,921 pages, in the court of Judicial Magistrate First Class (JMFC) at Dahanu taluka in Palghar district located adjoining Mumbai.

Two monks and their driver were lynched by the mob at Gadchinchale village in the district on April 16 when they were travelling in a car to Surat (Gujarat) to attend a funeral amid the coronavirus-induced lockdown.

"According to the chargesheet, a few days before the incident of lynching, rumours had spread in Gadchinchle village and the surrounding area about the child lifting gangs in operation," the official said on Thursday.

"This has come to light during the investigation and any other angle for the lynching of sadhus has been ruled out," he said.

According to the official, the CID also collected cyber evidence, including messages and posts about child- lifting gangs that were circulated on social media platforms in the area.

"These messages and posts said that the members of these gangs can come to the village by posing themselves as sadhus, doctors, officials of police, forest or other departments, wearing uniforms," he said.

Three different offences have been registered in connection with the case at Kasa police station in Palghar.

The investigation was transferred to the state CID on April 21.

In all, 154 people were arrested and 11 juveniles detained in connection with the incident.

None of the accused has been released on bail so far, the official said.

A team led by Special IGP (West) CID, Pravin Salunke, carried out the investigation during the coronavirus-triggered lockdown.

"It was the most challenging time of the pandemic and the investigation in the case was difficult as scores of people had to be called in for questioning," a senior official, who was part of the probe, said.

The teams had to camp in the area to collect intelligence, nab the accused and undertake searches or seizures in the area, he said.

Besides sections of the Indian Penal Code (IPC), the accused were charged under relevant provisions of the Disaster Management Act, the Epidemic Diseases Act (since lockdown was in force during the incident), the Maharashtra Police Act and the Maharashtra Damage to Public Property (Prevention) Act, the release said.

They were charged with murder, armed rioting and using criminal force to prevent a public servant from doing is duty, among other offences.

The voluminous chargesheet is being scrutinised by court officials, a CID official said.

Once the scrutiny is done, charges will be framed against the accused by the court, the official said.

The CID ream examined 808 suspects and 118 witnesses to collect strong evidence against the accused, he said.

"Although two different chargesheets have been filed in two separate offences, in the due course of time, the investigators are likely to merge the cases and the chargesheets with the permissions of higher courts for smooth investigation," the official said.

The victims of the lynching incident were identified by the police as Chikne Maharaj Kalpavrukshagiri (70), Sushil Giri Maharaj (35) and their driver Nilesh Telgade (30).

After the incident caused an uproar, the state government suspended Kasa police station in-charge Anandrao Kale, under whose jurisdiction the crime took place, and some other policemen, including sub-inspectors.

Besides, over 35 police constables and personnel of other ranks were transferred in the wake of the mob attack.