Citizenship Bill: Scores of protesting students, others injured in Assam as police use force 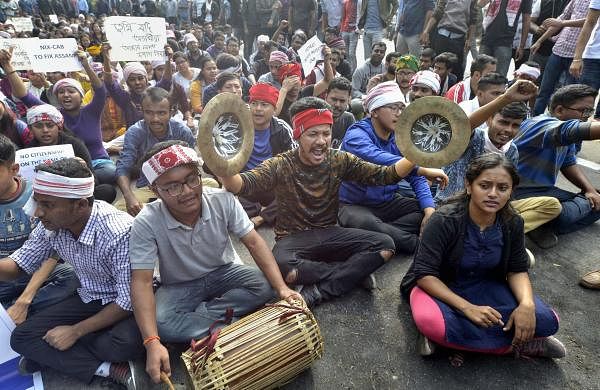 GUWAHATI: Scores of people, including students, were injured in police actions as the protests against controversial Citizenship (Amendment) Bill, 2019 get intensified in Assam.

The police resorted to lathi-charge and fired teargas shells as thousands of students from various colleges of Guwahati were taking out a procession to the State Secretariat in Dispur area.

When the students tried to break the police barricade at ABC area on the ever-busy GS Road, the personnel resorted to lathi-charge and fired teargas shells to disperse them.

Scores of students, including girls, were injured. Most of them boycotted their semester exams and took part in the protests. They are still staging a protest demonstration at the site and shouting slogans against the BJP and BJP-led governments in the state and at the centre for forcibly imposing the CAB on Assam and the Assamese. Vehicular traffic came to a grinding halt on the road.

The Cotton University students had launched a protest demonstration on the campus on Tuesday. As the government is in no mood to withdraw the Bill, they had decided to register their protests in front of the State Secretariat.

In Upper Assam’s Dibrugarh, several protestors were injured when the police used batons to disperse a mob that blocked a highway. Thousands of people, including students and villagers, had hit the highway early in the morning.

They burnt tyres on the road and blocked vehicular movement. A journalist was injured when the protestors pelted stones targeting the policemen and personnel of paramilitary forces.

The protests forced the authorities of Northeast Frontier Railway to either cancel or reschedule several trains. A number of them were stranded at different places as the protestors blocked their movement.

The protests are spontaneous and they are being staged in many other parts of the state as well. The protestors are blocking major roads to express their anger against the Bill which seeks to grant Indian citizenship to “persecuted” immigrants belonging to six non-Muslim communities who migrated from Bangladesh, Pakistan and Afghanistan till December 31, 2014.

The protestors said the Bill was a grave threat to Assam and its land, language and culture.