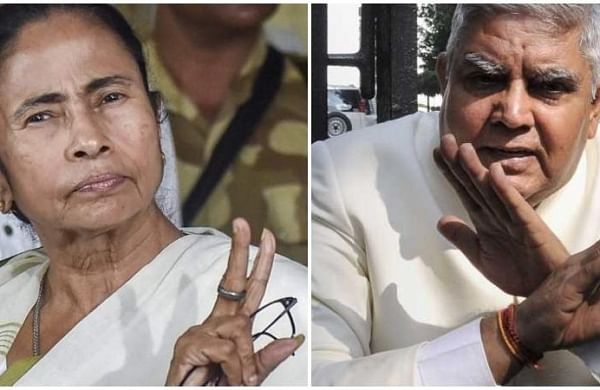 KOLKATA: West Bengal Governor Jagdeep Dhankhar, who has had frequent run-ins with Mamata Banerjee, tried to call a truce with her and even requested for a seat for his wife in the chief minister's enclosure at the Republic Day event here which was declined by state authorities over "protocol" issues.

A highly placed official at the state secretariat said on Monday the government had received a request from the Raj Bhavan to accommodate the first lady in the enclosure meant for the chief minister at the main Republic Day function on the Red Road.

"There was a request to make arrangements so that the first lady's seat is near the CM's. But that could not be entertained due to certain protocol considerations," the IAS officer told PTI, wishing not to be named.

The Dhankhars were seen engaged in a brief conversation with Banerjee after the function had ended on Sunday.

The governor even posted some photographs of him and his wife Sudesh with Banerjee on Twitter.

"Some glimpses just before leaving the parade for Raj Bhawan. Communication in any form can only lead to affirmative way forward," Dhankhar had tweeted after the event.

Later that evening, Banerjee attended the Raj Bhavan 'At Home', but cold vibes between them were in evidence again.

After the national anthem had been played at the beginning of the function, the Dhankhars and Banerjee took their seats at the table, but minutes later the chief minister shifted to a corner surrounded by top state government functionaries and their security detail.

The 'At Home' ended with the playing of the national anthem and Banerjee walked towards Dhankhar.

As she was about to leave after exchanging pleasantries with him, Dhankhar requested the CM to come over someday for a "dialogue over a cup of tea or coffee".

Banerjee smiled broadly and looked at Chief Secretary Rajiva Sinha for some time, before leaving the venue without making a commitment.

"Moments while the Honble Chief Minister is leaving the Reception at Raj Bhawan. While parting indicated to her that we must soon engage in dialogue in larger interest. Hopefully it should mature soon enough," Dhankhar tweeted.

He also posted some photographs of the event that showed him and the chief minister together.

Dhankhar had a brief interaction with Banerjee during Prime Minister Narendra Modi's recent visit to the city.

"Had impromptu interaction with Hon'ble Chief Minister yesterday after PM Modi inaugurated sound and light show at Howrah Bridge. Renewed my offer of meeting over a cup of Tea or Coffee," he had then tweeted.

There's many a slip between the cup and the lip!