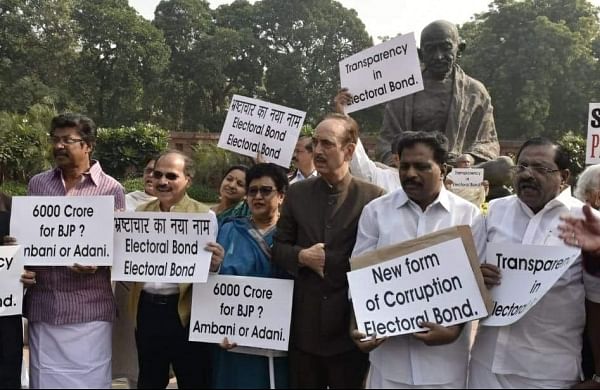 NEW DELHI: The Congress on Friday stepped up its attack on the Centre over electoral bonds, alleging that the government is a "factory of lies" and demanded that Prime Minister Narendra Modi break his silence over the issue.

The issue of electoral bonds has snowballed into a political flashpoint following reports that the Reserve Bank of India and the Election Commission had reservations against them, but were overruled by the Modi government.

Adhir Ranjan Chowdhury, leader of Congress in Lok Sabha, demanded here on Friday that government should constitute a committee to scrutinize "electoral bonds" and alleged that it is a conspiracy to fill the coffers of BJP for election funding.

Under the electoral bonds scheme, a donor can anonymously buy a bond and deposit it with the party of their choice. Under these Bonds, the government has offered complete anonymity to those making donations.

"Electoral Bond is a device to turn black money into white. The government should form a scrutinizing committee over the electoral bonds," said Chowdhury.

"It is an instrument exploited by the present dispensation in order to flourish their election funds. The concept of Electoral Bond was objected by Reserve Bank of India (RBI) and even Election Commission of India (ECI) has argued against the issuance of Electoral bonds," he said.

The Congress MPs staged a walkout from the Lok Sabha on Thursday alleging lack of transparency in electoral bonds after party leader Manish Tewari raised the issue and said that the decision has institutionalised "government corruption."