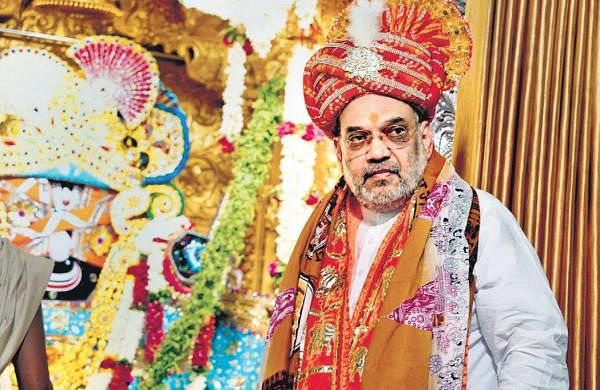 AHMEDABAD:  Union Home Minister Amit Shah on Friday reminded Gujarati voters that the Congress-led Gujarat governments in the past had thrice banned the annual Lord Jagannath Rathyatra and it showed that they were incapable of protecting the people of the state.

Notably, the Central government had recently selected the temple of Goddess Vardaini under its PRASAD (Pilgrimage Rejuvenation and Spiritual Augmentation Drive) Scheme. Shah said that curfews during the Rath Yatra are a thing of the past as no one dares to play any mischief during Rath Yatra since the BJP came to power nearly 27 years ago.

“Today, we are witnessing the 145th edition of the annual Rath Yatra (in Ahmedabad). During the Congress rule (before 1995), people used to live in fear that something untoward would happen during the Rath Yatra.

Their fear was legitimate because riots had happened during the Rath Yatra with miscreants even trying to snatch away the chariots on two occasions,” he said.

“But things changed after the people of Gujarat gave the reins to the BJP instead of Congress. Now, nobody even dares to play any mischief during the Rath Yatra. When I was young, I had witnessed how Congress had banned taking out the processions thrice as if they were admitting that they were not capable enough to protect Lord Jagannath,” said Shah. He added that Rath Yatra is now taken out with full cooperation of the BJP government in the state.