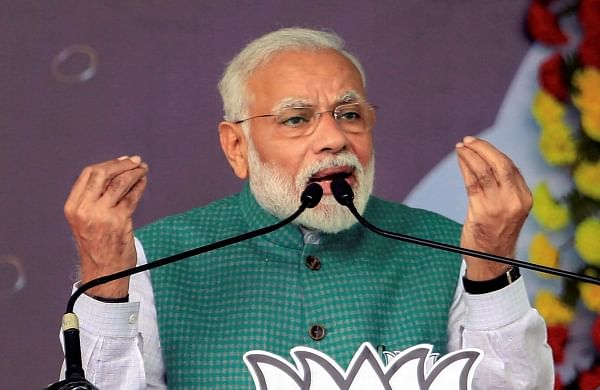 RANCHI: Prime Minister Narendra Modi on Sunday accused the Congress of fuelling violence over the Citizen Amendment Act and said the opposition party had neither the intention nor any roadmap for development.

Addressing an election rally at Dumka in Jharkhand, Modi said the Congress party’s tacit support to the violent protests over the last few days proved that the decision to pass the Bill was “1,000 per cent correct”.

“The Congress and its allies have been creating uproar and even resorted to arson after they did not get their way. People who are setting fire (to public property) can be seen on TV... They can be identified by the clothes they are wearing,” he added.

Modi claimed the people of the Northeastern states had rejected violent agitation against the new citizenship law and were protesting peacefully.

There was no hope left with the Congress and its alliance partners that they would do any good to this country as they had entered public life only for the betterment of their family, the Prime Minister said, adding that was the reason they were not ready to accept the people who wanted to work for the country and society.

He criticised the Congress for staging a protest outside the Indian embassy in London, calling it  shameful.

“It is really a shame that the Congress party is repeating the activities which Pakistan has been doing to malign the image of India in the world community,” said Modi.

"What could be a more shameless act than Indians staging protest in front of their own embassy in a foreign country? the PM added.

Modi further said the people of India were watching the actions of the Congress and its alliance partners and were getting more confident with the day that the decision of making changes in the citizenship Act had saved the country.

West Bengal CM Mamata Banerjee held an emergency meeting with senior officers of state administration and police on Sunday night and directed them to remain on high alert, amid incidents of violence. In the two-hour meeting at her residence, Banerjee directed strict action against those indulging in vandalism.

The chairman of the National Commission for Minorities Syed Ghayorul Hasan Rizvi said the CAA is not against minorities and Indian Muslims need not fear as they are neither intruders nor refugees. “Some people are saying the Act is anti-Muslim but it is not true as there is no mention of Indian Muslims in it,” Rizwi said.

“Savarkar had demanded to bring land from Sindhu river to Kanyakumari under one country. Instead of that, the BJP-government is simply accepting persecuted minorities into India,” he said.