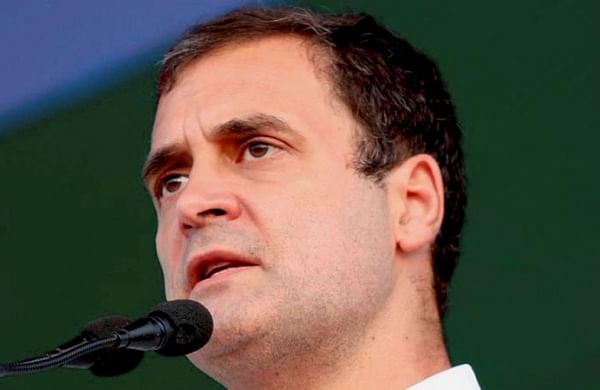 NEW DELHI: Accusing BJP leaders, including former Union minister Rajyavardhan Rathore, of sharing "deliberately fabricated and distorted reportage" on Rahul Gandhi's comments in Kerala, the Congress on Saturday threatened to take legal action against them if the saffron party fails to apologise.

Rahul Gandhi also lashed out at the BJP and the RSS, alleging that "propaganda and lies" are their foundation.

The opposition party attacked Rathore and called him "shameless" after Twitter labelled a post by him on a video of Rahul Gandhi's remarks in Kerala as "media presented out of context".

In a letter to BJP chief J P Nadda, Congress general secretary in-charge communication Jairam Ramesh said he was appalled to note that several BJP leaders have been deliberately and enthusiastically sharing "mischievous" reportage that occurred on a news channel on Friday.

"The original video was Shri. Rahul Gandhi's comment on the SFI violence on his Wayanad office but it was deliberately and mischievously doctored to appear as if it was a comment on the heinous murder of Kanhaiya Lal in Udaipur," Ramesh said.

It was immediately brought to the attention of all concerned that the reportage was false and deliberately misleading, he said.

"What is of even greater concern, is that several of your party colleagues, including Rajyavardhan Rathore, MP, Subrat Pathak MP, Kamlesh Saini, MLA and others, have enthusiastically and without verification published and shared the deliberately fabricated and distorted reportage," Ramesh said in his letter.

"Despite being cautioned by my party colleagues that the clip was maliciously false and misleading, Rathore persisted with amplifying the same, first deleting and then re-uploading the same," he said.

This leaves no doubt that Rathore's actions were deliberate and part of your party's strategy to defame the former Congress president, the party and to further polarise an already sensitive, communal situation, Ramesh alleged.

''The fact that some of your colleagues may have deleted the false reportage later after uploading and sharing is no excuse whatsoever because the damage has already been inflicted,'' he said.

"We have already initiated appropriate legal action against the original broadcaster. We expect that you and your party colleagues will cease and desist from spreading such falsehoods," Ramesh said in his communication to Nadda.

"Furthermore, I expect that you will immediately issue an appropriate apology on behalf of your colleagues who have acted with such reckless disregard towards the truth."

"If this apology is not issued today, we will take appropriate legal action against your party and its leaders who insist and persist in using social media in such a blatantly irresponsible and criminal manner," Ramesh warned.

There was no immediate reaction from the BJP.

In an apparent reference to the issue, Rahul Gandhi in a tweet in Hindi said, "Whole India knows the history of BJP-RSS, which warms its hands by pushing the country in the fire of hatred.

"No matter how much these traitors try to break the country, the Congress will continue to do more work to unite India," he said.

The communication department head, Pawan Khera, said that those BJP leaders who have put out "fake video" of Rahul Gandhi should be ready to tour the country as they will have to make rounds of the courts of many cities.

"Doctored Shameless Rathore has this honour of being labelled by @twitter as a man who posts fake content," Khera tweeted, sharing a screenshot of Twitter's flagging of Rathore's post.