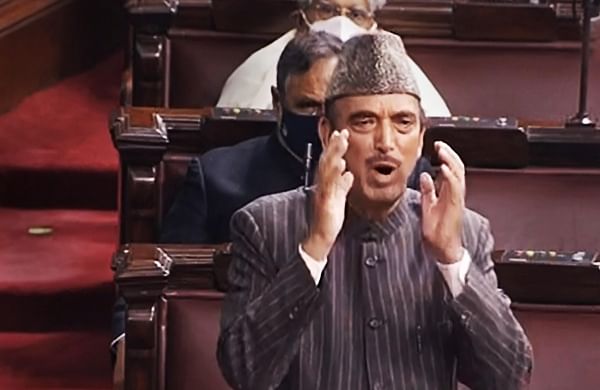 JAMMU: Congress party workers on Tuesday burnt an effigy of senior party leader Ghulam Nabi Azad and raised slogans against him in a protest in Jammu.

This comes as Azad praised Prime Minister Narendra Modi at the G-23 event in the state saying that he speaks frankly about his past as a tea-seller and never tried to hide his background from the world.

Targeting Azad, Shahnawaz Choudhary, General Secretary of Jammu and Kashmir Pradesh Congress Committee said Congress has always held him in high esteem but today when it is time to support the party, Azad forged a friendship with Bharatiya Janata Party (BJP).

"Congress has always given him (Ghulam Nabi Azad) so much. Congress has only made him the chief minister of Jammu and Kashmir, but when it is time for him to pay-back to the party, he is making Congress weak by not supporting his own party," Choudhary said.

"Azad should have guided the party with his experience in politics to resurrect the party and not weaken it," Choudhary added.

The protesters who were carrying party flags said they will fight against any force questioning the leadership of Sonia Gandhi and Rahul Gandhi.

At the same time, Ghulam Nabi Azad's statement has not been liked by G-23 members too. A leader told ANI on the condition of anonymity that Azad should not have made these remarks as they can deflect attention from the G-23's aim of strengthening the party.

An event was organised in Jammu by the Gandhi Global Family whose national chairman is Ghulam Nabi Azad where G-23 leaders were invited.