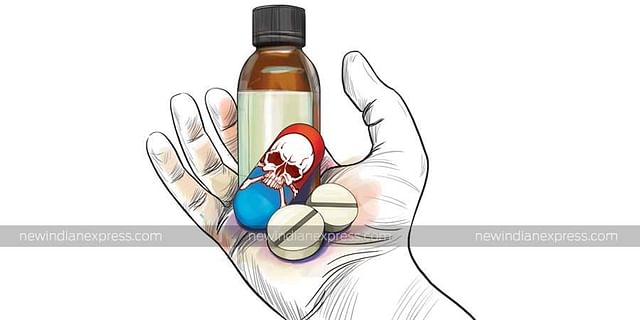 It is so, so ironical, and heart-rending too, that an industry mandated to lessen pain and suffering can succumb to the greed to make a few extra bucks from peddling contaminated medicine. But that’s the kind of world we live in.

We are of course referring to the 70 children from The Gambia who died after consuming 4 brands of cough syrups made by Maiden Pharmaceuticals in its two Haryana plants. The World Health Organization (WHO) was the first to put out an alert over a week ago flagging that two contaminants – diethylene Glycol (DEG) and ethylene Glycol (EG) – could have caused the acute kidney damage the kids died from.

The WHO alert was put out on 5 October, but it took all of 7 days for the regulatory authorities– the Central Drugs Standard Control Organization (CDSCO) and Haryana’s state drug controller –  to finally stop production at Maiden Pharma’s Haryana facilities on 12 October.

Looking at the facts of the case, the company should never be around today. Maiden Pharma was blacklisted by Bihar in 2011 for selling cough syrup that failed local standards tests. It failed a quality test in Jammu & Kashmir in 2020.

In recent years, Kerala state has pulled up the company at least 5 times for selling sub-standard tablets. In 2014, the company was among 40 other Indian pharma companies blacklisted by Vietnam for violation of local drug regulation standards.

Initially, the company and the Indian government took a cavalier stand. In a press statement, Maiden Pharma said it was “shocked” by the deaths of the children; but claimed it had “been diligently following the protocols of the health authorities…”.

The Ministry of Health and Family Welfare shifted the blame to the Gambia. “It is a usual practice that the importing country tests these imported products on quality parameters, and satisfies itself as to the quality of the products…”

The Health Ministry is quite aware that the Gambia and other African countries have poor testing facilities. Gambia’s Medicine Control Agency executive director Markieu Janneh Kaira admitted it prioritizes checks on anti-malarial drugs, antibiotics and painkillers, rather than cough syrup.

Had it not been a poor African country but a Western, Caucasian nation, the tune would have been different!

The deaths of the children in the Gambia have only underlined what has been known all along: that our drugs regulatory system is creaky and sub-standard, and urgently needs an overhaul.

Fatalities due to contaminated medicinal inputs, and the failure of the detection and accountability machinery are legendary. In September, the Chandigarh-based PGI reported the death of 5 patients from the possible use of contaminated propofol, otherwise considered a safe anaesthetic agent.

Diethylene glycol (DEG) poisoning, what the Gambian kids died of, has had its murderous run in India earlier too. In 2020, 12 children died of DEG contamination; and before that, there were 36 deaths in Gurgaon in 1998, again most of them children who had consumed contaminated cough syrup.

In the case of Maiden Pharma, a mere check of the inputs before production would have aborted the process of production and export of the contaminated syrups.

The poor regulatory system has been under review since 2000. A committee headed by well-known scientist R A Mashelkar submitted its report in 2003 admitting that the regulatory framework was inadequate. It recommended a well-equipped and professionally-managed Central Drugs Standard Control Organization (CDSCO) free of interference by state bodies. These recommendations have largely remained on paper.

On-the-ground pharmaceutical units find it quite easy to secure licenses and approvals as most state regulators are interested more in the licensing revenue than detecting violations. Again, on paper, all units have to go through annual checks for compliance with good manufacturing practices (GMP).

But it is rare these inspections are scrupulously carried out and reports ever written out, much less published. Transparency has to be a vital condition – the US Food and Drugs Administration (FDA) for instance makes all such inspection reports public.

Besides the human tragedy, these dangerous shortcuts by a few pharma companies endanger the business prospects of the entire industry. For India, pharma exports are a USD 40 billion market mostly to Africa, South America, and parts of Asia. We also produce one-third of the world’s medicines, mostly in the generic form, and account for 60 per cent of the global vaccine production.

Scientists from the University of Ottawa and Maryland, in a pilot study, have pointed out that the tendency to sell sub-standard drugs by Indian pharma companies is quite pronounced due to the poor regulatory system in African countries. In fact, quality standards applied to African countries are lower than those applied in India.

But things are tightening up. Nigeria’s National Agency for Food and Drug Administration is now asking for all imported shipments to be cleared by approved agents before they leave Indian shores. If the government does not bolster its inspection and approval process, buyers are bound to turn to more reliable suppliers.

Deaths of the children in the Gambia have only underlined what has been known all along: that our drugs regulatory system is creaky and sub-standard, and urgently needs an overhaul. Fatalities due to contaminated medicinal inputs, and the failure of the detection and accountability machinery are legend. In September, the Chandigarh-based PGI reported the death of 5 patients from the possible use of contaminated propofol. (AIR NEWS)