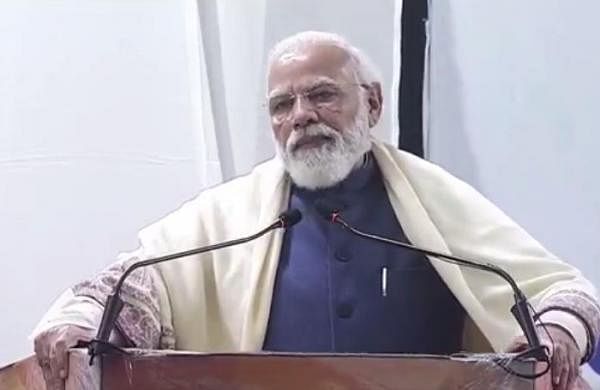 NEW DELHI:  Taking a swipe at the previous governments, Prime Minister Narendra Modi said on Sunday that attempts were made after independence to erase contributions of many great people besides India’s culture and values. The Prime Minister said that the country is now correcting mistakes of the past.

“India’s freedom struggle involved the sacrifices of lakhs of people, but attempts were made to limit their history. But today, decades after independence, the country is correcting those mistakes,” he said.

Prime Minister was addressing a gathering after unveiling a hologram statue of Netaji Subhas Chandra Bose at the India Gate on the 125th birth anniversary of the freedom fighter, Mr. Modi also said no power in the world can prevent the country from achieving its goal of building a ‘new India’ before the hundredth year of independence in 2047.

He also exhorted people to take inspiration from Netaji Subhas Chandra Bose’s “can do” and “will do” spirit.

The Prime Minister also conferred the ‘Subhas Chandra Bose Aapda Prabandhan Puraskar’ for the years 2019, 2020, 2021 and 2022 in the investiture ceremony. A total of seven awards were presented during the ceremony.

“We have laid emphasis on reform along with relief, rescue and rehabilitation,” he said.

“We strengthened, modernised, and expanded the NDRF across the country. From space technology to planning and management, best possible practices have been adopted,” he said.

Unveiling the digital hologram, Modi said, “The grand statue of our Netaji, who had established the first independent government on India’s soil, is being installed in digital form near India Gate. Very soon this hologram statue will be replaced by a big granite statue,”.

The hologram statue is powered by a 30,000 lumens 4K projector. An invisible holographic screen has been erected in such a way that it is not visible to visitors. The 3D image of Netaji Subhas Chandra Bose has been projected on it to create the effect of a hologram.

The 28-feet-long and 6 feet wide hologram statue has been installed under a canopy which used to house the statue of King George V till it was removed in 1968.

An invisible, high gain, 90 percent transparent holographic screen has been erected in such a way that it is not visible to visitors.