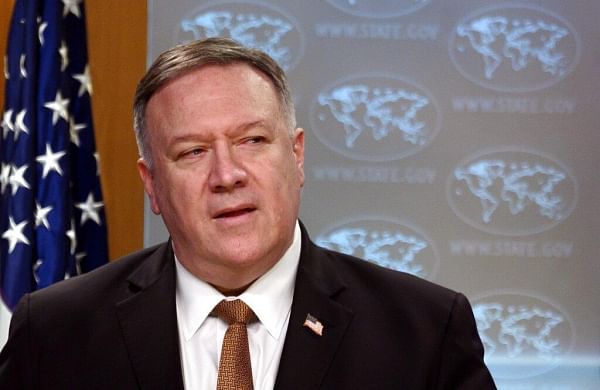 WASHINGTON: China's ruling Communist Party poses a substantial threat to Americans' health and their way of life, US Secretary of State Mike Pompeo said on Thursday, blasting Beijing for the intentional "disinformation campaign" and trying to deflect from its handling of the coronavirus crisis.

Pompeo, a known critic of China, said China's delay in sharing information about the virus had created risks to people worldwide.

Coronavirus has claimed 1,031 lives in the United States as of Wednesday, with New York being particularly affected as it recorded over 300 deaths. The total number of cases rose to 68, 572.

"The Chinese Communist Party (CCP) poses a substantial threat to our health and way of life, as the Wuhan virus outbreak clearly has demonstrated," Pompeo told reporters at a State Department news after video conference with his counterparts from G7 countries.

"The CCP also threatens to undermine the free and open order that has underpinned our mutual prosperity and safety in the G7 countries," he said.

Pompeo said, during the meeting, the US urged every country to work together to protect the UN and other organisations from China's malign influence and authoritarianism.

"We G7 countries must promote our shared values of freedom, sovereignty, good governance, transparency, and accountability, and push the UN to uphold these principles as well," he said.

There was a discussion among the G7 countries about the intentional disinformation campaign that China has been and continues to be engaged in, he said.

"You see it. You see it in the social media. You see it in remarks from senior people inside the Chinese Communist Party talking about whether this was a US brought to China. This is crazy talk," he said.

"Every member of the G7 today saw this disinformation campaign. China now making small sales of product around the world and claiming that they are now the white hat in what has taken place here.

"This isn't a time for blame; this is a time to solve this global problem. We are focused on that today," Pompeo said.

Every nation that was at that meeting this morning was deeply aware of the disinformation campaign that the Chinese Communist Party is engaged in to try and deflect from what has really taken place here, he alleged, amidst the brewing of an anti-China sentiment in the US on the latter's handling of coronavirus.

There are talks in Congress to hold China responsible for the coronavirus outbreak because it hid information.

Some of the lawmakers are also calling on China to pay damages to the US and the world.

Congresswoman Elise Stefanik introduced a Resolution in the House of Representatives and Senator Josh Hawley in the Senate calling for an international investigation into the Chinese Communist Party's cover-up of the early spread of the coronavirus outbreak.

The Resolution calls on China to pay back all nations impacted due to its intentional, early coverup of the deadly virus.

"The Communist government of China knowingly withheld critical information needed to combat the spread of the Chinese-born COVID-19 and to this day continues to spread lies and disinformation on the origin of the deadly virus," Stefanik said.

"There is no doubt that China's unconscionable decision to orchestrate an elaborate coverup of the wide-ranging and deadly implications of coronavirus led to the death of thousands of people, including hundreds of Americans and climbing.

This Resolution calls for China to provide compensation for the harm, loss, and destruction their arrogance brought upon the rest of the world. Simply put, China must, and will, be held accountable," she said.

"Since day one, the Chinese Communist Party intentionally lied to the world about the origin of this pandemic.

The CCP was aware of the reality of the virus as early as December but ordered laboratories to destroy samples and forced doctors to keep silent," said Hawley.

"It is time for an international investigation into the role their cover-up played in the spread of this devastating pandemic.

The CCP must be held to account for what the world is now suffering," he said.

Congressman Matt Gaetz introduced legislation to prevent any funds appropriated by the US Congress, including coronavirus relief funds, from being distributed to businesses owned by the Chinese government.

"'No CHINA Act' prevents appropriated money, including coronavirus relief funds, from being disbursed to businesses owned by the Chinese government.

Chinese corporations operating in America must not be eligible for the upcoming trillion-dollar bailout, now or ever," he said.

Senator John Barrasso said that China had been exposed.

"We cannot allow ourselves ever again to be in any way dependent on China for medicines, for materials, or for minerals," he said.