COVID-19: Engineering entrance JEE-Main likely to be pushed to February 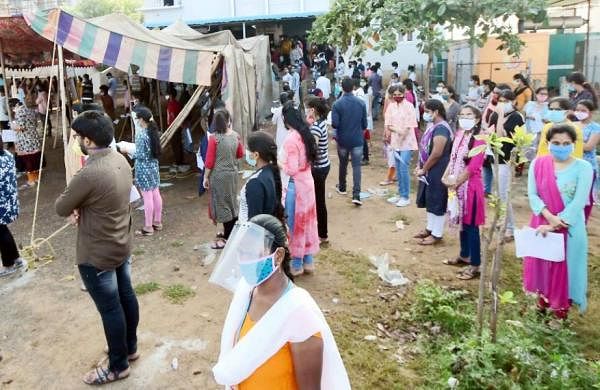 NEW DELHI: The Joint Entrance Exam (JEE)-Main for admission to engineering colleges across the country is likely to be held in February instead of January, according to officials.

The rising number of COVID-19 cases and engineering admission for this year still being underway, are among the reasons behind authorities contemplating the move.

"As the engineering admission is still underway, it is being considered that JEE-Main of 2021 is pushed to February. This will give a chance to students who were not satisfied with the choice of the branch or their score," a senior official said.

"Rising number of coronavirus cases is also a factor," the official added.

An official notification on the date of the exam is expected soon and the application process will begin next month.

JEE-Main, which is the national level competitive test for admission to various undergraduate engineering and architecture courses, including the eligibility test for the JEE-Advanced for admission to the IITs is conducted twice a year-January and April.

However, due to the COVID-19 situation, the April exam was postponed twice this year and conducted in September.

The government last month has also decided to widen the reach of the JEE-Main by offering it in more regional languages.

Currently, it is offered in English, Hindi, and Gujarati.

There is no clarity on whether shifting the JEE-Main to February will have any effect on other competitive exams and board exams.

A total of 8.58 lakh candidates had registered for the JEE-Main exam this year for admission to engineering courses in IITs, NITs, and Centrally Funded Technical Institutions (CFTIs) while only 74 per cent of them had appeared for the exam.

Increasing the number of examination centers, alternate seating plans, fewer candidates per room and staggered entry and exit were among the steps taken by the National Testing Agency for safely conducting the crucial exam.