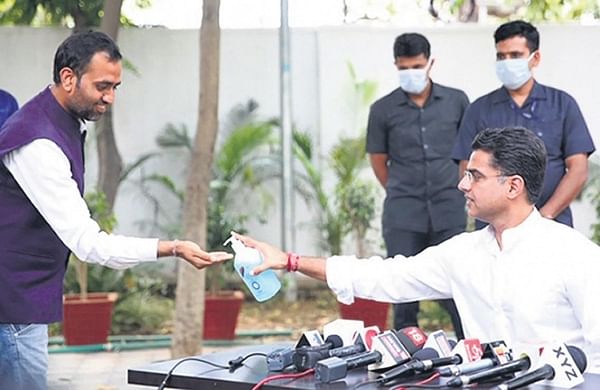 JAIPUR: The postponement of the Rajya Sabha elections in Rajasthan due to the corona pandemic has brought the tussle between Chief Minister Ashok Gehlot and his deputy Sachin Pilot to the fore again.
Once the Election Commission postponed the polls slated for March 26, Gehlot criticised the decision, saying no parties were consulted even as his deputy Sachin Pilot supported it.

Soon after the EC decision, Gehlot tweeted accusing the Centre of imposing its decision on every constitutional body.

He added the most worrying part is that till yesterday there was a Parliament session on. “I think the Commission has taken this decision under pressure from Modi-Shah because of not being able to do horse trading in Rajasthan and Gujarat. We are not opposed to the decision to postpone the election, but for this the opinion of all political parties should have been taken. We are all concerned with the coronavirus infection.

There is a lockdown in Rajasthan. We have taken every decision by informing the opposition and taking their opinion. This is how democracy works,” Gehlot’s tweets said.

A little later, however, Sachin Pilot called a section of the media to his residence and claimed that the postponement was a very good step. “People will also get the message that public safety has been given priority. This epidemic affects every country. We have to fight carefully. Follow central and state instructions,” he said.

Pilot pointedly added that it is wrong to politicize every decision of the EC. CM Ashok Gehlot has held many meetings over the virus threat but Pilot has conspicuously been absent in them.

(THE NEW INDIAN EXPRESS)
110 Days ago