COVID-19: Looking to have fewer death than originally thought, says Trump as US toll crosses 12,000 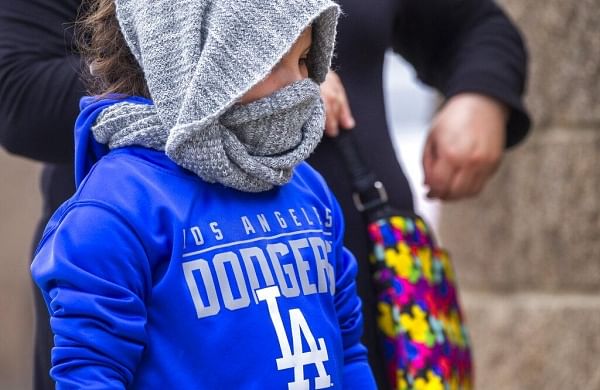 WASHINGTON: The number of deaths in the US due to coronavirus on Tuesday crossed 12,700, with a record 1,900 fatalities in a single day, as President Donald Trump sought to assure a grieving nation that new data projections reveal fewer deaths than originally thought.

"We're looking to have far fewer deaths than originally thought. I think we're heading in that direction, but it's too early to talk about it," Trump told reporters at his daily White House news briefing.

While the death toll in the US continues to soar and those being infected by the deadly virus now approaching four lakhs, the highest for any country in the world.

The national number of both fatalities and cases of infections are expected to jump during the next week, officials believe, but they exuded confidence that strict enforcement of social mitigation measures, including social distancing, would help bring things under control in the next few weeks.

"We are seeing light at the end of the tunnel," Trump said during a White House meeting on Small Businesses. Nearly 97 percent of America's 330 million population are under stay-at-home order.

In the last 10 days, the US Army has added thousands of new beds by converting large public spaces like convention centers into makeshift hospitals.

Thousands of ventilators have been distributed, along with millions of face masks, personal protection equipment, and essential medical supplies.

"A lot of the occupancy is really getting a little bit lower than anticipated, and that is good," Trump said.

"I think maybe we are getting to the very top of the curve," he added. Referring to his conversation with the New York Governor Andrew Cuomo he said he seems to think that he is getting close to the peak.

Hoping that they are soon going to hit the downside, he said this is, however, going to be a very difficult week.

"This week will be a very difficult week because that is the most difficult week when you are at that top position and we will see what happens," Trump said.

"As we stand here today in the midst of heartbreaking numbers of losses in New York City, I also want to assure the American people that there is the reason for hope," Vice President Mike Pence told reporters during the daily White House briefing on coronavirus.

The latest figures from the ground, he said, reflect evidence of stabilization in some of the areas around the country of the most significant outbreak, the New York metro area including New Jersey, Long Island, and Connecticut, New Orleans metro area, Detroit, Boston, Chicago, and Denver.

This, in a very real sense, is evidence that the American people are putting into practice the social distancing, the president's guidelines, he said.

The social distancing measures have now been extended till April 30.

According to Dr. Deborah Brix, member of the White House Task Force on coronavirus, "figures from the last three days show that in a series of communities outside New York, New Jersey and Connecticut is creating a much flatter graph, almost much flatter curve".

"The lower curve parameter in cities like Detroit and Chicago shows the amazing activity of every American in those cities to ensure that they're social distancing," he said.

"Americans are understating more and more that while we tend to think of this as one large curve in our minds when it began in our country and we long for the day that it will end and we hasten that day by putting into practice some of these mitigation efforts," Pence said in response to a question.

In an interview with a local radio station in Arizona, Dr. Robert Redfield, director of the US Centers for Disease Control and Prevention said the new models are projecting less than 100,000 deaths as against the previous projection of between one and two lakhs.

"Those models that were done, they assumed that only about 50 percent of the American public would pay attention to the recommendations.

"In fact, it would seem, a large majority of the Americans are taking the social distancing recommendations to heart -- and I think that's the direct consequence of why you're seeing the numbers are going to be much, much, much, much lower than would've been predicted by the models," Redfield told Tucson Radio Station.

(THE NEW INDIAN EXPRESS)
396 Days ago