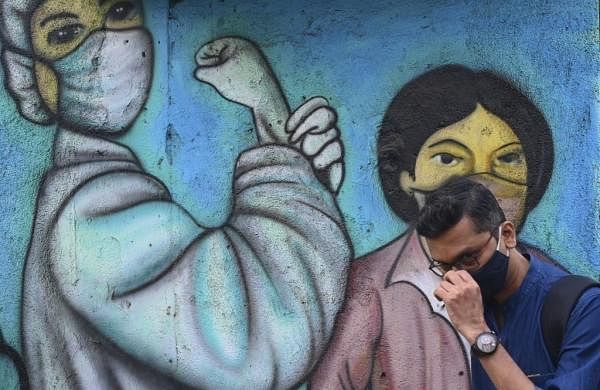 AHMEDABAD: Gujarat police have collected fines worth Rs 3.63 crore between January 8 and 11 from people violating the mask rule for COVID-19 prevention and those spitting in public, officials said on Wednesday.

The fine for not wearing a mask in public places in the state is Rs 1,000.

On an average, around 9,000 people were fined every day from January 8 to 11 for the COVID-19 related violations in Gujarat, the state police said in a release.

"A penalty of Rs 3.63 crore was collected in the four days from 36,510 people who were found moving out without mask or spitting in public," the police said.

As many as 1,763 FIRs under Indian Penal Code Section 188 were also registered during this period against those not adhering to various directions issued by the administration to curb the spread of coronavirus, the release said.

Since night curfew (from 10 pm to 6 am) is in force in Gujarat's four major cities - Ahmedabad, Rajkot, Vadodara and Surat, police arrested 2,944 people found roaming during the night between January 8 and 11. Also, 3,117 vehicles have been seized for curfew violations during this period, the release said.

Night curfew was imposed in the four cities towards the end of November last year, as Gujarat at that time saw a sudden spike in COVID-19 cases after Diwali.

Meanwhile, Gujarat Director General of Police Ashish Bhatia has asked all police officers in districts and cities of the state to strictly implement the SOPs and guidelines laid down for COVID-19 prevention, and to make sure that people wear masks and maintain social distancing.

The DGP has also instructed officials concerned to conduct regular patrolling and deploy extra force to take action against violators.

The state has so far reported 4,350 deaths due to the disease, as per the health department.