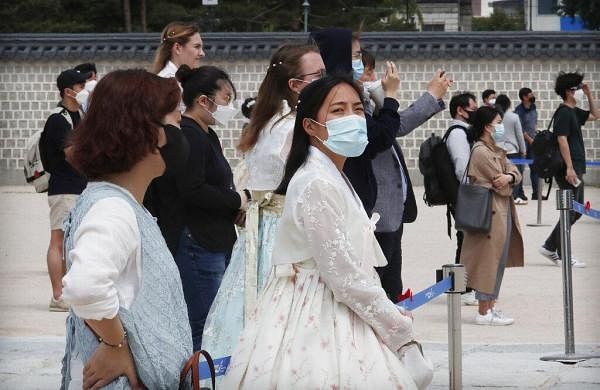 SEOUL: South Korea on Thursday reported its biggest jump in coronavirus cases in more than 50 days, a huge setback that could erase some of its hard-won gains.

Health officials warned that the resurgence is getting harder to track and social distancing and other steps need to be taken.

The Korea Centres for Disease Control and Prevention said 67 of the 79 new cases reported were from the Seoul metropolitan area, where about half of South Korea's 51 million people live.

Health Minister Park Neung-hoo during a virus meeting pleaded for all residents in the greater capital area to avoid unnecessary gatherings and urged companies to keep sick employees off work.

At least 69 infections so far have been linked to workers at a massive warehouse operated by local e-commerce giant Coupang.

Health authorities say the company likely didn't enforce preventive measures such as masks at the facility in Bucheon, near Seoul, and may have had employees working while they were sick.

Hundreds of other infections have been linked to nightclubs and other entertainment venues, which saw huge crowds in early May after officials relaxed social distancing guidelines.

It remains to be seen whether the recent spike in infections force back a phased reopening of schools, which had been a major accomplishment in the nation's anti-virus campaign.

The Education Ministry on Wednesday said class openings were delayed at 561 schools nationwide because of virus concerns.

KCDC director Jeong Eun-kyeong has said the country may need to reimpose social distancing restrictions after easing them in April, saying it's becoming increasingly difficult for health workers to track transmissions amid increasing public activity.

"The number of people or locations we have to trace are increasing geometrically," she said during a briefing Wednesday afternoon.

"We will do our best to trace contacts and implement preventive measures, but there's a limit to such efforts. There's a need to maximize social distancing in areas where the virus is circulating, to force people to avoid public facilities and other crowded spaces."

Officials are preparing for a possible surge of infections in the greater capital area, mapping out plans to share hospital capacities between Seoul and nearby cities and ensure swift transports of patients so that a spike of cases in one area doesn't overwhelm its hospital system.

Meanwhile, South Korea's central bank lowered its policy rate to an all-time low of 0.5% to soften the pandemic's shock to the country's trade-dependent economy.

The Bank of Korea also adjusted its annual growth outlook from a 2.1% expansion to a 0.2% contraction.

The country's economy hasn't seen an annual contraction since 1998. The nation's economy shrank 1.4% during the first three months of the year as people stayed home and exports shrank amid worldwide lockdowns.

South Korea was reporting around 500 new cases per day in early March before managing to stabilize its outbreak with aggressive tracking and testing, which allowed officials to relax social distancing guidelines.

But Seoul and nearby cities restored some of the controls in recent weeks by shutting thousands of bars, karaoke rooms and other entertainment venues to slow the spread of the virus.

The spike on Thursday followed 40 new cases reported on Wednesday, which was the highest figure in 49 days. South Korea has now reported 11,344 cases and 269 deaths from COVID-19.