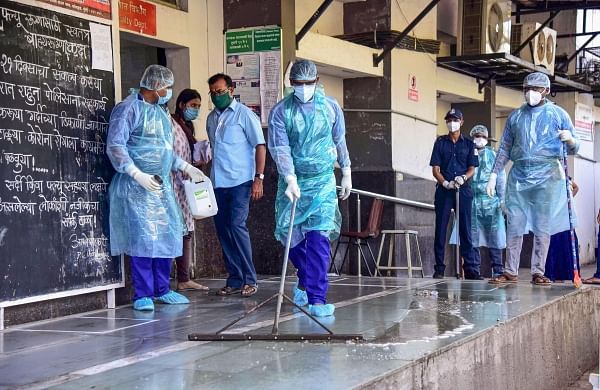 MUMBAI: Among the 116 fresh COVID-19 cases reported from Mumbai on Tuesday were two cases from Dharavi, the densely-populated urban slum sprawl, which has added to the worries of the Brihanumbai Municipal Corporation (BMC).

The total number of coronavirus positive cases in Mumbai now stands at 642 with 40 deaths so far, including six new victims, a BMC release said.

According to the BMC, at least four of the six patients who died had comorbidities (existing health conditions).

With two more persons testing positive for coronavirus, the number of cases in Dharavi now stands at seven.

While the man is admitted to Kasturba Hospital, his five close contacts have been quarantined, the civic body said.

"The rise in the cases is seen because 55 patients were diagnosed among contacts in the high-risk containment areas as a result of screening clinics and vigorous contact- tracing efforts by health teams. All the high-risk contacts are given timely attention and tested," it said.

The BMC on Tuesday checked over 550 people at its special OPDs and admitted 221 people in hospitals, as per the release.

Meanwhile, after a 45-year-old tea vendor who did his business near `Matoshree', the private residence of Chief Minister Uddhav Thackeray, the BMC has collected swab samples of 200 people who possibly came in contact with him.

All the police personnel and other security officials at Matoshree have been quarantined at the Uttar Bhartiya Sangh building in Bandra.

The vendor's tea stall was visited by many of the police personnel and security staff posted at Matoshree, a civic official said.

Their test reports are awaited along with those of two workers at the tea stall who have been admitted to HBT hospital in suburban Jogeshwari.

Tope tweeted that he visited the Rajeev Gandhi sports complex which is being used as a quarantine facility in Dharavi, and directed the police to take stringent steps to contain the spread of coronavirus in the area.

(THE NEW INDIAN EXPRESS)
396 Days ago