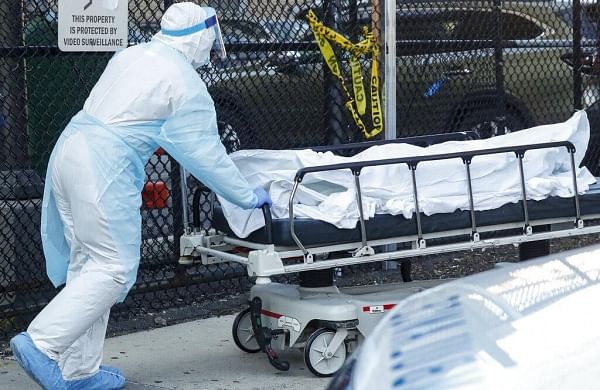 WASHINGTON: The death toll in the US from the coronavirus crossed the 10,000-mark on Monday as the country entered the most difficult phase during this pandemic with officials stating that there are encouraging signs in the fight against the dreaded disease mainly due to the aggressive implementation of the mitigation measures.

By Monday, over 10,986 Americans died due to the deadly coronavirus and more than 366,000 tested positive, to which top American scientists are racing against time to develop either a vaccine or a successful treatment.

Globally it has infected more than 13 lakhs people and resulted in the deaths of almost 75,000 people.

In New York, the epicenter of COVID-19 in the US, the fatalities on Monday increased to 4,758 and confirmed cases to 130,000, with officials saying that new cases and deaths have now slowed down in the Big Apple.

Members of the White House Task Force on coronavirus said that the new models based on fresh data projects less than 100,000 death against the previous projections between 100,000 and 200,000.

This has been mainly due to the aggressive implementation of the mitigation strategy.

"We are increasingly hopeful that the aggressive mitigation strategy we put into place will ultimately allow our hospitals system to successfully manage that major influx of cases that we have right now," Trump told reporters at his daily White House news conference.

The goal is that all Americans have been sacrificing to achieve these last few weeks things that a lot of people thought were not possible to achieve, he said.

"I think we've more than achieved, but we have to go through.

According to the president, there are so many things happening with therapeutics, and with vaccines.

"Those therapeutics, the vaccines are going to be always a little bit later because of that testing period, but the therapeutics, getting the kind of things that I heard about today talking to these brilliant companies and brilliant people on the phone was fantastic," he said.

Currently there are 10 different therapeutic agents in active trials and some are looking incredibly successful, he said, adding that another 15 are in plans for clinical trials.

A second company announced that the US Food and Drug Administration has authorised its vaccine candidate to begin critical trials, he said.

Dr Deborah Brix, member of the White House Task Force on coronavirus, told Fox News on Monday that the drop in new cases in New York and other places shows American people are following the presidential guidelines: social distancing, not gathering in groups any groups, over time trying to keep going out to an absolute minimum. Getting drive through, getting carry out, getting delivery services, and really protecting all Americans, "We know this is a very transmittable virus and having all Americans pulled together in this moment of great need as a nation. It is really inspirational," she said.

"We are really beginning to see the impact of the sacrifice that Americans have made for each other.

"And we're in a call to action for this next 26 days or 25 days to really ensure that we're doing everything we can to stop the spread of this virus we can do it as a nation," she said.

Meanwhile, on Monday, Texas reported 464 more cases of the new coronavirus, an increase of about 7 per cent over the previous day, bringing the total number of known cases to 7,319.

In a press conference on Monday, Texas Governor Greg Abbot said there have been 85,357 Texans who have been tested for the COVID-19 and 7,319 have tested positive.

Governor Abbott provided an update on personal protective equipment (PPE) distribution throughout the state of Texas.

"It is vital that our health care workers and first responders on the front lines have the personal protective equipment they need to stay safe as they respond to COVID-19," said Abbott said.

He also said that Texas received 2.5 million masks in the past 24 hours, and will receive an additional 3 million masks by April 11.

"The only states that have administered more tests than Texas are those with more dire consequences with regard to people in their states," he said.

"All of the states that have tested more than Texas have more deaths. We have more than enough testing data in order to form the models that we need to make the assessments and determinations based upon science and data to understand the correct strategy for Texas."

In an executive order last month, Abbott closed all public schools through May 4.

Some districts have told students and parents their campuses will be closed "until further notice." Abbott also issued a warning to those not taking the self-quarantine orders seriously.