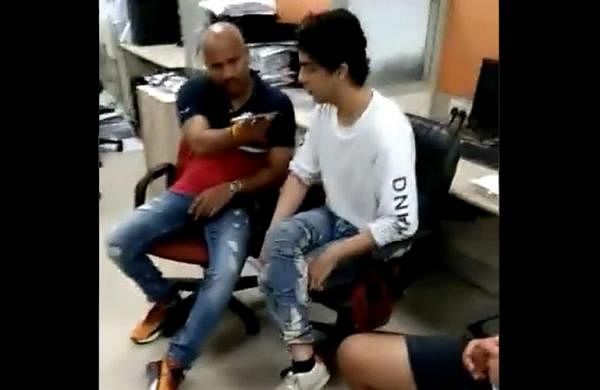 MUMBAI: A video shared on Sunday by an 'independent witness' in the cruise drugs case purportedly shows absconding witness KP Gosavi recording an audio of Aryan Khan, son of actor Shah Rukh Khan, at the NCB office here, in which hotelier Kunal Jani, who was earlier arrested in a separate drugs case, was also briefly seen.

The video that showed Jani, who is the director of a prominent restaurant in Bandra here, at the NCB's office, triggered speculations that he had some connection in the raid conducted by the anti-drugs agency on the cruise ship earlier this month that led to the alleged seizure of drugs and arrest of Aryan Khan and others.

However, sources in the Narcotics Control Bureau (NCB) said that Jani was arrested by the agency in a separate drugs case and he was present at its office when Aryan Khan was brought there as his (Jani's) statement was also being recorded.

Jani was arrested by the NCB on September 30 in connection with a drug case wherein Agisilaos Demetriades, brother of actor Arjun Rampal's partner, is also an accused. Demetriades was accused of running a drug syndicate.

Jani got out on bail on October 10. NCB sources said that Jani's name first appeared in the case linked to actor Sushant Singh Rajput's death. The Enforcement Directorate (ED) officials found a chat group of Jani and Rhea Chakraborty where drugs were being discussed.

Actor Shilpa Shetty's husband Raj Kundra is a partner in Jani's hotel. Kundra is an accused in a pornographic films case, who got out on bail last month. Sail on Sunday also claimed that Rs 25 crore was demanded by an official of the Narcotics Control Bureau (NCB) and other persons, including Gosavi, to let off Aryan Khan, arrested in the case.

Sail told media persons that he had overheard Gosavi telling one Sam D'Souza over the phone after Aryan Khan was brought to the NCB office after the October 3 raid about a demand of Rs 25 crore and "to settle at Rs 18 crore as they have to give Rs eight crore to Sameer Wankhede", the zonal director of the NCB.

However, the NCB has denied the allegations.