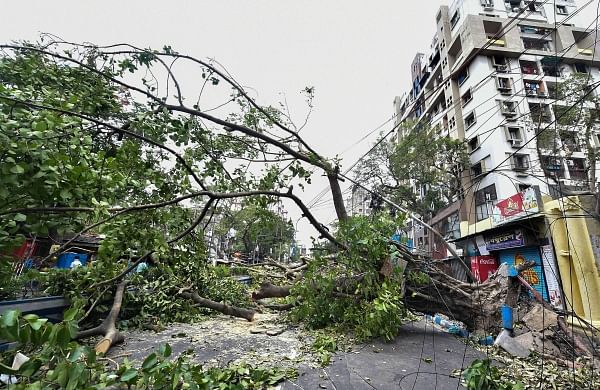 KOLKATA: As protests continued in parts of West Bengal over alleged misappropriation of monetary compensation to the people affected by cyclone 'Amphan', the ruling TMC cracked a whip against corruption and expelled several party leaders and workers, while the BJP and CPI(M) said that they won't stand by those who have been proven guilty.

Although Trinamool Congress (TMC), which controls nearly 80 per cent of the state's panchayats, has been at the receiving end of the public ire, the opposition BJP and the CPI(M) have also faced protests in some areas over allegations of fraud related to the 'Amphan' aid delivery.

The protests have been taking place in various parts of East Midnapore, South and North 24 Parganas, the worst- affected districts by the cyclone 'Amphan' which hit West Bengal on May 20, killing 96 people and leaving behind a trail of destruction.

"Whenever any complaint was received, we took action against the accused leaders and party workers. We have either suspended or asked them to return money. We have zero- tolerance towards corruption," a senior TMC leader said.

Several local level TMC leaders were recently expelled from the party for their alleged involvement in corruption and nepotism, he said.

West Bengal Chief Minister and TMC president Mamata Banerjee recently said that her government was rectifying the "lapses" which might have occurred in its effort to pay the compensation to the cyclone-hit victims quickly.

She had earlier warned a section of the party leaders of stern administrative action for being involved in corruption over the distribution of relief materials to the cyclone- affected people and said the party wouldn't stand by the wrongdoers.

The opposition BJP, which have been accusing the TMC of indulging in corruption, also faced protests in some areas, where the party controls the panchayats.

The BJP leadership, however, said these protests were orchestrated by the TMC to malign the saffron camp. "In areas where the BJP is in power in Panchayat, they hardly have any power to exert.

All the powers are vested with the local administration. Most of these allegations are baseless. "If there is any iota of truth, let the administration take action. We won't stand by them, if they are proven guilty," BJP state general secretary Sayantan Basu said.

The CPI(M) leadership has said that it wouldn't stand by leaders and workers from the party if they are found guilty in corruption over the distribution of aid.