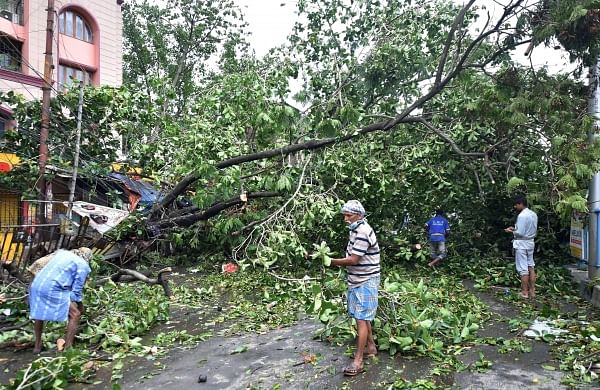 KOLKATA: In his mid-60s, Shyamshundar Karmakar and his handicapped brother cowered in fear as their old, dilapidated house — built by his great grandfather during British era in north Kolkata’s Sovabazar — trembled for over four hours. Darkness had engulfed the house as power cables snapped.

The grip of his hand on his brother’s wrist tightened as an eerie whistling spooked them when the cyclone slammed onto the old wooden windows.

“There was intermittent drizzling from the morning. I switched on the television and watched news channels. All were discussing about Amphan and possible threats in Kolkata. Anticipating power cut during the storm, I went to a grocery shop and bought two candles and matchboxes. I decided to have an early lunch. But the weather started changing by the time I finished my food. By then, it was drizzling. The heavy shower started coupled with wind,’’ recounted Karmakar, who lost his wife 15 years ago.

Karmakar thought of having a post-lunch nap.

“But suddenly, I realised things are worsening. I again switched on the TV and came to know the cyclone was only 30 km from Kolkata. By then, the wind started slamming on windows and doors. I came out but could not stand,’’ he said.

On hearing a loud noise, he looked through the narrow gap of a window.

“I saw a water tank rolling on the roof of my neighbour’s house. It seems like someone was playing with a little plastic ball. It was rolling in circles and then slammed onto the wall of an adjoining house,’’ said Karmakar.

The elderly man left his brother, who is also in his 60s,  only when the electric supply snapped.

“I went down to bring candles and matchbox. For the rest of the time, both of us remained motionless in a dark room till 8.30 pm.’’

Relief partially set in as the eerily whistling sound was gone once the cyclone snaked away from the city, he recounted.

In a meeting, Telecom Secretary Anshu Prakash asked both Airtel and Vodafone Idea to get 1,000 sites working in the next 24 hours.

The IMD used all the latest information available to give an accurate prediction on cyclone Amphan, Director-General Mrutunjay Mohapatra said.