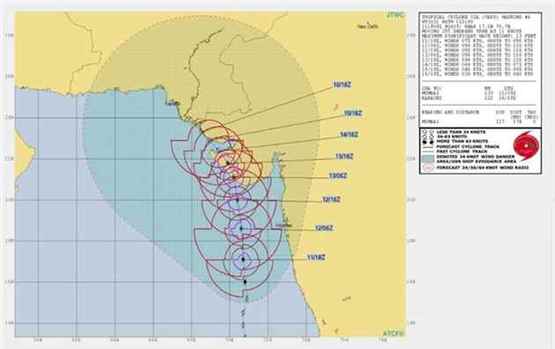 The MeT department said, the Cyclone is very likely to cross the Gujarat coast between Veraval and Diu by early tomorrow morning. It is likely to inundate the low lying coastal areas of Kutch, Devbhoomi, Dwarka, Porbandar, Junagarh, Diu, Gir Somnath, Amreli and Bhavnagar districts at the time of landfall. Heavy to very heavy rain is likely at several places in Saurashtra, South Gujarat, Diu, Daman and Dadra Nagar Haveli in the next two days.

Gujarat Chief Secretary said approximately 2 lakh 80,000 people from vulnerable areas along the coast will be evacuated from today. Arrangements have been made to warn people of the cyclone through announcements in media and bulk SMS.

All schools, colleges and anganvadis centres in districts that could be hit by the Cyclone have been closed for today and tomorrow. The fishermen have been advised not to venture into the sea.

Union Home Minister Amit Shah chaired a high-level meeting in New Delhi yesterday to review the preparations of concerned State and Central Ministries to deal with the situation. He directed the senior officers to take every possible measure to ensure the safe evacuation of people and maintenance of all essential services such as power, telecommunications, health and drinking water.

Chief Minister Vijay Rupani Yesterday held a meeting to review the state’s preparedness to minimize the impact of Cyclone Vayu. 36 teams of the National Disaster Response Force or NDRF, along with 34 teams of the Indian Army, the Coast Guard, BSF and other agencies have all been deployed in the state in view of the cyclone.

Schools and colleges will remain closed for two days from today in all the 10 districts of Saurashtra. People from the likely affected areas will be evacuated today. The State government has also appealed the tourists to leave to safer places. (AIR NEWS)