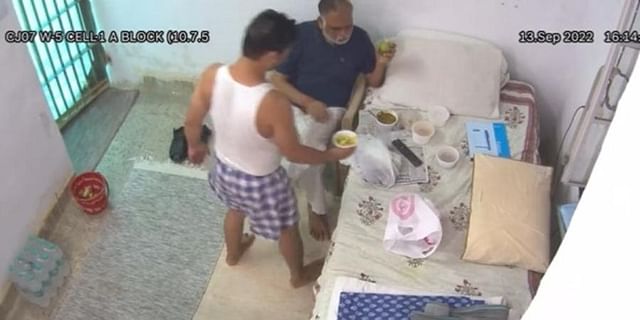 NEW DELHI: A new purported video of jailed Delhi minister Satyendar Jain having an elaborate meal inside Tihar has emerged, just a day after footage of the minister receiving an oil massage inside his jail cell trigged an uproar.

Tihar Jail sources also said that the Delhi minister gained 8 kg weight during his time in jail, contrary to his lawyer's claims of him having lost 28 kgs.

The new footage surfaced a day after Jain on Tuesday submitted before the trial court that he has not been getting privileges like proper food and medical check-up in Tihar Jail. He had also claimed that he lost 28 kg while being locked up in jail.


Sharing the video on his twitter handle BJP spokesperson Shehzad Poonawalla said "One more video from media! After taking maalish from the rapist & calling him PHYSIO therapist, Satyendra Jain can be seen enjoying a sumptuous meal! Attendants serve him food as if he is in a resort on vacation!"

In an accompanying video on his Twitter account, Poonawalla said after," He is being served outside food by two attendants as if he is in a resort or a restaurant and there is a variety of delicacies and dishes in front him, as if he is not there for the saza (punishment) of corruption, but maza (fun) of maalish (massage)and restaurant food."

"Arvind Kejriwal must answer why the person who has been in jail for the last five months is being given this facility by keeping him in the minister post -- to take 'vasooli' from Sukesh, maalish from a rapist and now food from outside jail," Shehzad said.

In the latest purported footage from Tihar jail, Jain is seen having food including fruits and dry fruits.

On Tuesday, the minister's counsel Senior Advocate Rahul Mehra had alleged that Enforcement Directorate was leaking sensitive information to the media despite the order of the Court and undertaking given in this court.

Rahul Mehra also denied ED allegations of getting privileged treatment in Tihar Jail. He asked, "What privilege are they talking about?"

"I have lost 28 kg in jail. Is this what a privileged person in jail gets? I'm not even getting proper food. What privilege are they talking about? No prison rules are violated if an undertrial is pressing his hand or feet," Jain said.

However, appearing for ED, advocate Zohaib Hossain denied the allegations made by Satyendar Jain's lawyer and said that there is not a single leak from the Enforcement Directorate.

The latest episode comes days after purported videos of the minister getting a massage inside his cell in Tihar went viral on social media. The Aam Aadmi Party however asserted that Jain was receiving physiotherapy.

Sources reported on Tuesday that the person administering massage on Jain was not a physiotherapist, furthermore, he has been identified as a rape accused too.

Jailed Delhi Minister Satyendar Jain, who was criticised over the viral CCTV video inside the Tihar, was being given a massage by an accused in a rape case, the official sources claimed on Tuesday.

The Tihar Jail official sources claimed that the prisoner, identified as Rinku, was "not a physiotherapist" and has been charged under the Protection of Children from Sexual Offences (POCSO) Act, 2012.

"The masseur providing massage to jailed Delhi min Satyendar Jain is a prisoner Rinku. He's a prisoner in a rape case, charged u/s 6 of POCSO Act and 376, 506 & 509 of IPC. He's not a physiotherapist," the sources claimed.

Deputy Chief Minister Manish Sisodia on Saturday had claimed that the CCTV footage that went viral showing Jain being given a full-body massage was a "treatment for injury".

"Only BJP can make cruel jokes by leaking CCTV footage of an injured person's treatment... His (Satyendar Jain's) spine was damaged, it's on record," Sisodia had said on Saturday.

However, the Deputy Chief Minister's claim was refuted by the Indian Association of Physiotherapists.

The body also demanded an apology for "degrading physiotherapy".

Calling out the Minister, the Indian Association of Physiotherapists tweeted on Saturday, "IAP strongly condemns the statement of the minister degrading physiotherapy by comparing it with massage given to another minister. Shows the level of education and knowledge they have about our noble profession."

In a video, the president of the association condemned the minister while also demanding an apology from him.

"There is news going on on social media and we have received many complaints from our members. Many physiotherapists all across India that in jail, and one physiotherapy session was given to a patient. And as a professor of physiotherapy and as president of the Indian

Association of Physiotherapists, we can say that the session going on was not physiotherapy. It is a way of degrading physiotherapy. We strongly condemn this act. We want that the Minister or whosoever should apologise for that," he said.

"I request all physiotherapists in India to write down to the news channels that please don't degrade physiotherapy. This is not physiotherapy. Let's condemn this act and let's move in a direction where we can correct things," the president added.

Earlier on Saturday, the former PRO of the Tihar jail said that it cannot be physiotherapy as the video clearly showed that co-inmates were giving him a massage.

Sunil Gupta, former PRO of the Tihar jail told ANI that the video makes it clear that other prisoners of the prison were giving the minister a massage.

The purported CCTV footage dated September 13 shows the minister lying on his bed while a man seated next to him is seen massaging his foot.

In another video shared by BJP national spokesperson Shehzad Poonawalla on his official Twitter handle, a man is seen massaging the Delhi minister's legs and back before proceeding to give him a full head massage.

The videos surfaced on social media on Saturday, 10 days after the ED accused the Delhi minister, was arrested in a money laundering case, of getting special treatment inside the Tihar jail.

Jain has been in jail since June. A Delhi court denied his bail application on November 16. (THE NEW INDIAN EXPRESS)