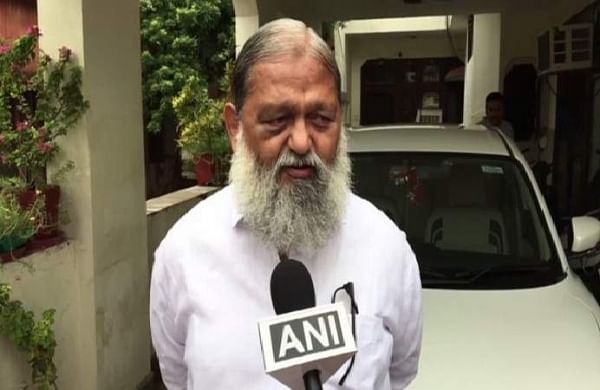 CHANDIGARH: Haryana minister Anil Vij on Wednesday alleged that a tanker carrying medical oxygen for COVID patients in hospitals, which was going from Panipat to Faridabad, was ''looted'' by the Delhi government and said all oxygen tankers will now move with a police escort.

Vij also said given the increased demand for oxygen due to a surge in coronavirus cases, Haryana can spare the supply for others only after the state meets its own demand.

Interacting with reporters, the health and home minister, while referring to the tanker, said, ''Yesterday, one of our oxygen tankers was going from Panipat to supply to hospitals in Faridabad. When it was passing through Delhi, the tanker was looted by the Delhi government which is very wrong."

'''If governments indulge in such things, then it will result in chaos,'' he said.

Vij said that he has now ordered that all oxygen tankers will move with a police escort so that such incidents do not happen in the future.

''But to take out gas from a tanker in this manner is highly condemnable,'' he said.

''We will write to Delhi government officials about this incident,'' he said.

He further claimed that pressure was being put on the state to give medical oxygen to Delhi. Faridabad in Haryana lies adjoining the national capital.

The minister said the two neighbouring states from which Haryana earlier used to get the supply for oxygen have currently stopped it to meet their own demand.

''We also used to get supply the from Baddi in Himachal Pradesh and Bhiwadi in Rajasthan but the governments there have stopped the supply now'' he said.

''In our plants in Haryana, I have deployed officials and police because we want to first meet our requirements. Pressure is being put on us that we should supply to Delhi. We have no problem in doing so if we have spare supply, but our first priority is Haryana,'' Vij said.

Vij said that given the pandemic is global everyone needs to join hands to fight it, but the state has to first meet its own needs.

Delhi Chief Minister Arvind Kejriwal had on Tuesday urged the Centre "with folded hands" to provide medical oxygen to Delhi and his deputy Manish Sisodia said there will be chaos in the city if the stocks are not replenished by Wednesday morning.

Meanwhile, on remdesivir, Vij said there are two depots selling the antiviral drug and a strict vigil is being kept so that no one indulges in its black marketing given the surge in demand.

''We have deployed drug department officials there and the movement of every vial is being recorded. All chemists have been asked to keep a record of remdesivir being sold to anyone by noting their Aadhaar card number,'' he said.

During the past three weeks, Haryana registered a sharp increase in coronavirus cases.

On Tuesday the state recorded 7,811 new cases of COVID-19, its biggest single-day spike so far, while 35 more people succumbed to the viral disease.