Delta plus variant: A day after raising concerns, scientists say no need to panic 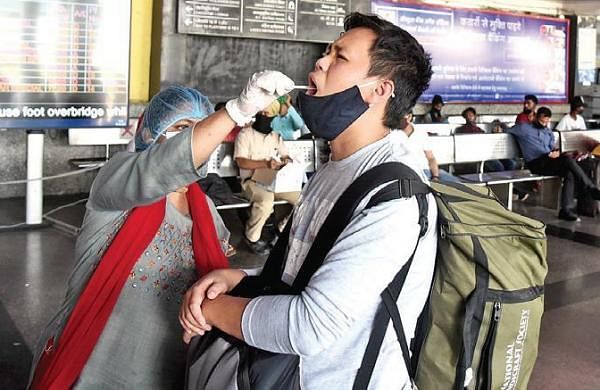 NEW DELHI: A day after the Centre raised an alarm on the delta plus variant of Covid-19 in 3 states, scientists associated with the government’s genomic surveillance project said that its detection in India should be a cause of concern but not a reason to panic as yet.

The Union Health Ministry while issuing a statement on INSACOG report on delta variant with K417N mutation –also being called B.1.617.2.1 or AY.1 or delta plus- said that this was first detected in India in a sample collected on April 5 in Maharashtra and has been found so far in about 40 cases.

INSACOG is a consortium of laboratories set up by the Centre for genomic and epidemiological surveillance of  Covid in the country and has thus far carried out whole genome sequencing in about 45,000 virus samples collected across India.

The government, as well as scientists associated with the project, said that there is no evidence so far to suggest that this variant is more transmissible or increased disease severity.

However, the government has swung into action—by issuing quick advisories to Kerala and Madhya Pradesh, apart from Maharashtra, where this mutant has been detected—as delta variant itself was largely responsible for the devastating second wave in the country and has now been seen coupled with a still more worrying mutation.

The K417N mutation—which has previously been seen in the South African and Brazilian variants—has been found to evade immune response, raising worries against possible reduced effectiveness of existing vaccines against this mutant.

“The government has done a good thing by issuing an advisory to states on increasing surveillance and heightened measures,” said a scientist with CSIR-Institute of Genomics and Integrative Biology, part of the 28-lab network.

“But we are yet to understand whether the effects of mutations are neutral, additive, or even bigger than sum of individuals mutations but it is difficult to do it immediately mainly because of meagre number of cases so far,” he added.

An independent virologist, not directly attached with the project said that in the wake of the new finding, the government should also reveal it's future strategy.

“In my view, a test like the one developed in the UK which is faster and cheaper than whole genome sequencing in detecting the mutation should be urgently considered and deployed here in order to understand the characteristics and progression of this variant,” he told this newspaper.

The ministry, meanwhile, said that INSACOG first reported in a bulletin on June 18, the evolution of this variant--B.1.617.2 or delta variant with K417N mutation in spike protein.

The spike protein aids the virus to gain receptor-mediated entry into human cells and K417N corresponds to change of amino acid lysine (K) to asparagine (N) at the 417th position of spike protein.

“All delta sub-lineages are treated as variants of concern although properties of AY.1 are still being investigated,” the government said adding that currently, the variant frequency of AY.1 is low in India, with 40 sporadic cases reported from 3 states—Maharashtra, Kerala and Madhya Pradesh.

Across the world, 205 cases with AY.1 have been mostly reported from nine countries of Europe, Asia apart from the USA.

AY.1 was first reported by the Public Health England bulletin on June 11 and a retrospective analysis of samples by INSACOG revealed the first occurrence of this lineage from a sample collected from Maharashtra in early April.

The INSACOG report also said that there is other delta plus variants with other mutations and while AY.1 is the most well-known but these are not identical.

"A second clade found in sequences uploaded to GISAID from the USA, for example, is now designated AY.2, but has not been not seen in India yet," it said.