Depressed after being admitted to COVID-19 hospital, Jharkhand man dies by suicide 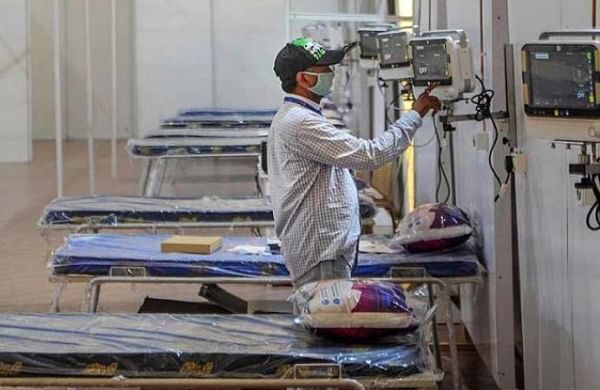 RANCHI: A man admitted to a COVID-19 hospital in Garhwa hanged himself from an iron gate on the premises early on Monday. The man, identified as Neeraj Upadhyay, who is in his twenties, is believed to have been depressed after being brought to the hospital on April 14 and had been asking regularly for oxygen support.

According to the other COVID patients admitted there, his behaviour had changed since Sunday night and he was shouting, coughing and walking here and there out of restlessness.

“After having dinner, his behaviour changed all of a sudden and he started shouting, became restless and asking for oxygen. And when we woke up in the morning, he was found hanging from the iron gate at the entrance of the hospital building,” said a patient requesting anonymity.

“After being admitted on April 14, he was apparently under depression due to which he possibly committed suicide,” said Civil Surgeon Dr Dinesh Kumar.

Local police said that the man was found hanging from the iron gate with the help of a towel.

“An investigation has been initiated,” said office in charge Ramavtaar.

(If you are having suicidal thoughts, or are worried about a friend or need emotional support, someone is always there to listen. Call Sneha Foundation - 04424640050 (available 24x7) or iCall, the Tata Institute of Social Sciences' helpline - 02225521111, which is available Monday to Saturday from 8 am to 10 pm.)

(THE NEW INDIAN EXPRESS)
19 Days ago