Din in UP Assembly on inaugural day of first session of Yogi government 2.0 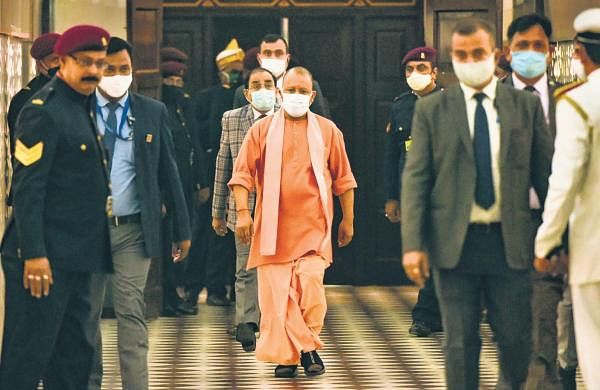 LUCKNOW: The first session of UP's 18th assembly was off to a fiery start with the Samajwadi Party MLAs putting up a huge protest by thronging the well with placards in hand and loud slogans on various issues during the State Governor Anandiben Patel's address to both the houses here on Monday.

As soon as the Governor stood up to deliver her address, SP MLAs took to slogan shouting and placards showing by thronging the well of the House over issues related to law and order, farmers, stray cattle and rape. Though the Governor delivered her address, it got sunk in the din and furore. The assembly was adjourned till 11 am on Tuesday.

It is the first session of Yogi Adityanath's government's second tenure.  The state government is slated to present its first budget of the second term on May 26.

While going to the house to attend the proceedings, UP CM Yogi Adityanath sought the support of all the members in the smooth conduct of the houses and promised a discussion on all the issues related to the public cause.

ALSO READ | Lucknow Diary: All that is happening in 'City of Nawabs'

"I welcome and greet all the honourable members. The session starts today (Monday). It begins with the Governor's speech. This is a tradition. I say with confidence that the manner in which the Governor's guidance is being received, the House will be able to proceed smoothly," said the CM while interacting with media persons, adding, "We are always ready for a positive discussion."

CM Yogi Adityanath further said any question or issue received by the Assembly Secretariat under the right rules will be answered by the government.

However, the CM cautioned against unruly behaviour saying any conduct which would be against the etiquette of the House will not be "tolerated".

The legislators were seen in saffron, red, blue, green and yellow cap and scarves as per the signature colour of their respective parties.

While the ruling BJP MLAs were seen in saffron caps, the SP MLAs, including Leader of Opposition (LoP) Akhilesh Yadav, had shown up in red caps. Members of the Rashtriya Lok Dal (RLD) had green scarves tied around their necks, six SBSP MLAs were in yellow during the proceedings of the house.

Earlier on Monday, SP MLAs Mohammad Azam Khan and his son, Abdullah Azam, were administered the oath as members of the assembly by Speaker Satish Mahana.

Earlier, on Sunday, Azam Khan, his son Abdullah, an MLA from Suar and Shivpal Yadav, MLA from Jaswantnagar on SP symbol, were conspicuous by their absence in the meeting of party MLAs convened by SP chief  Akhilesh Yadav to chalk out the strategy for house.

Significantly, Azam Khan has not been happy with the attitude of SP leadership towards him and has been disenchanted with the alleged lack of support from the party during his days in jail. However, Akhilesh has repeatedly been assuring his support to party stalwart.