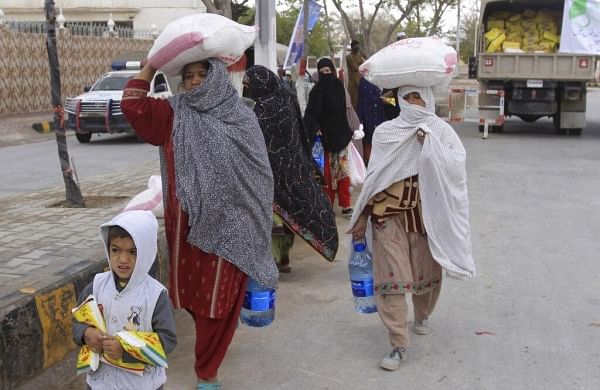 KARACHI: The world is united in fighting against Covid-19 pandemic but for Pakistan, religious discrimination remains a top priority amidst this global crisis.

The country's Hindus and Christian minorities are not being given food supplies by authorities, saying they are meant for the Muslims.

"Authorities are not helping us during the lockdown, the ration is also not being provided to us because we are part of a minority community," a Hindu man lamented.

Scores of marginalised people gather at Karachi's Rehrri Ghoth to receive food supplies and daily essentials as shops remain shut to curb the spread of coronavirus. But those belonging to the Hindu community are told to go back since the rations are only meant for Muslims.

"We only hear that people in our neighbourhoods are receiving essential goods. My son drives the rickshaw. Due to the lockdown, all services have been suspended. He is sitting idle at home. We do not have anything to eat. We have no money. Even when we visit the ration distribution centers, the authorities assure us that they will send essential items in separate trucks but eventually they don't," said another member of the Hindu community in Karachi.

Hindus in Pakistan form a 4 per cent of the country's population. The community is subjected to rampant discrimination and are often denied basic human rights.

Under international pressure and global outcry over the condition of the minorities in Pakistan, the Imran Khan-led government last year decided to restore over 400 Hindu temples which were demolished over the years.

One year on, the plan is yet to see the light of the day with not more than 12 temples in the country made functional. And the discrimination continues even at the time of global crisis- as serious as Covid-19 pandemic.

"Why is such a discrimination against us? The disease is affecting every one of us. Why is nobody cooperating with us?" he added.

"There is no ration at home since last week. The police chase us when we move out of our houses," complained a third.

Sindh government issued an order to distribute ration lockdown through local NGOs and administration to daily wage workers and laborers.

The distribution of food supplies is being organised by local government in collaboration with the district government.

"This is the second week of lockdown and we have no food at home. The officials only visit us to ask for votes. We don't even have money to buy food. Our daily living has been suspended due to the lockdown. Nobody has asked us so far regarding the problems we are facing," said a member of the Christian community in Karachi.

Hindus in Liyari, Sachal Ghoth and other parts of Karachi as well as all over Sindh are being denied a share in government food and rations if they happen to be Hindus.

Amjad Ayub Mirza, a political activist has warned that the minorities are now faced with a serious food crisis and asked the Indian government to send supplies via Rajasthan to Sindh.

He also appealed to Prime Minister Narendra Modi and the United Nations to intervene without delay to avert a humanitarian crisis in Sindh. There are more than half a million Hindus living in the Sindh province of Pakistan.