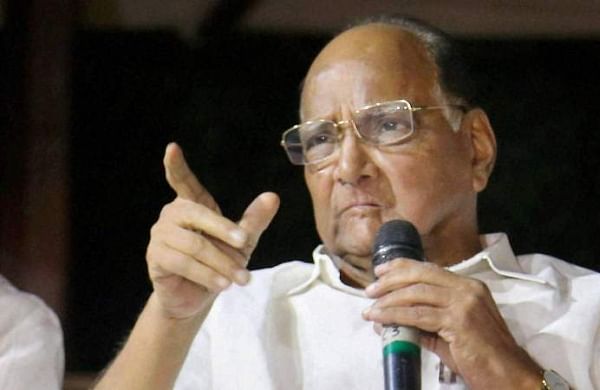 MUMBAI: Taking aim at the BJP, NCP president Sharad Pawar has said that politicians should not take voters for granted as even powerful leaders like Indira Gandhi and Atal Bihari Vajpayee had been defeated in elections.

Criticising former Maharashtra Chief Minister Devendra Fadnavis over his 'Mi punha yein' (I will come back) refrain during the last year's assembly polls, Pawar said voters thought this stance smacked of arrogance and felt that they should be taught a lesson.

He also said that that there was not an "iota of truth" in reports about differences in the three ruling allies- Shiv Sena, NCP and Congress- that are part of the Uddhav Thackeray-led Maha Vikas Aghadi (MVA) government.

The veteran leader said he was neither the headmaster nor the remote control of the MVA and made it clear that Thackeray and his ministers were running the government.

The former Union minister said this in an interview by Shiv Sena leader Sanjay Raut, who is also the Executive Editor of party mouthpiece 'Saamana'.

The first of the three-part interview series was published in the Marathi daily on Saturday.

This is for the first time that a non-Shiv Sena leader has featured in a marathon interview series in this newspaper.

In the past it had published such interviews of late Bal Thackeray and Uddhav Thackeray. Replying to a query over BJP's defeat in the last assembly polls in the state, Pawar said, "In a democracy, you cannot think that you will remain in power eternally.

Voters will not tolerate if they are taken for granted.

Even powerful leaders with mass base, like Indira Gandhi and Atal Bihari Vajpayee, had been defeated.

"It means that in terms of the democratic rights, the common man is wiser than the politicians. If we politicians cross the line, he teaches us a lesson. Therefore, people do not like the stand that 'we will come back to power'," he said.

"No politician should take people for granted. Nobody should take a stand that he would return to power.

People thought that this stand smacks of arrogance and hence feeling grew among them that they should be taught a lesson," Pawar said.

He said the change of government in Maharashtra was not an accident.

"People of Maharashtra voted as per the sentiments prevailing in the country during the national elections.

But the mood changed during the assembly polls. Even though the BJP did well in the Lok Sabha polls, it fared poorly in the assembly elections in different states.

Even people of Maharashtra voted for a change," he said.

Replying to a query over his reported differences with CM Thackeray on the lockdown in the state, Pawar said, "Absolutely not. What differences? For what? During the entire period of lockdown, I have had excellent communication with the chief minister, which continues even now."

Pawar, who played a key role in bringing together the Sena, Congress and NCP for formation of government in the state in November last year, blamed the media and said sarcastically that the news gathering activity had been hit by the coronavirus-induced lockdown and they had the responsibility of filling the pages of newspapers.

"I have been reading reports of growing differences among the three allies, but there is not an iota of truth in it," he said.

Responding to a query whether he was the headmaster or remote control of the MVA government, he said, "Headmaster is in the school. A remote control doesn't work in a government or administration of a democracy."

"I don't believe in remote control. The chief minister and his council of ministers are running the government," he added.

Giving example of Russia, where President Vladimir Putin has ordered amendments that would allow him to remain in power until 2036, Pawar said this kind of single-handed power does not work in a democracy.

Hitting out at the BJP, the veteran leader said Shiv Sena had a huge contribution in the BJP winning 105 seats in last assembly polls in Maharashtra.

"Without Shiv Sena's support, BJP would have been reduced to 40 to 50 seats only. BJP leaders say even though their party won 105 seats, Shiv Sena, which was an ally, ignored them.

But I feel that the BJP neglected the party which helped them reach the 105-mark and took them for granted," he said.

Pawar said he never felt that late Shiv Sena founder Bal Thackeray's ideology and style of functioning was in sync with that of the BJP's.

He said the late Sena supremo respected leaders from the BJP, like Vajpayee, L K Advani and Pramod Mahajan.

All the three leaders treated Thackeray well and decided to come together for sharing power, he said.

"Even Thackeray's opposition to the Congress was not permanent," Pawar said.

He recalled Bal Thackeray's support to his daughter Supriya Sule in her maiden Rajya Sabha election and also his refusal to field candidates in the Lok Sabha elections against the Congress after the Emergency was lifted.

Stating that the MVA experiment was working well, Pawar added that the coronavirus crisis was unfortunate since other developmental issues had to be put on the backburner.

"Three parties of different ideologies are firmly behind CM Uddhav Thackeray in the fight against coronavirus. Had there been any other set-up, this wouldn't have happened," Pawar said.

"Even though ideologies are different, the three parties have come together for the vision of working for people and there is a clarity on the path to be undertaken.

However, there is no support from the Centre," he said.

Speaking about the style of functioning of Bal Thackeray and his son Uddhav Thackeray, Pawar said, "Although Balasaheb was never in the seat of power, he was the driving force behind the power.

He got power in Maharashtra due to his ideology.

"Today, the government is not because of the ideology. But the responsibility of implementing that power now lies with Uddhav Thackeray," he said.