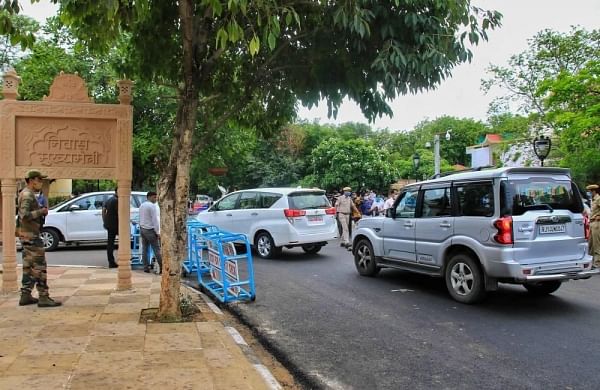 The Congress on Monday said its doors are open for Sachin Pilot, the rebel leader who has claimed that he has the support of over 30 party MLAs in the state's 200-member assembly.

He said those who want to attend it should call up Avinash Pande, the AICC general secretary in-charge of Rajasthan.

Pande, Surjewala and Ajay Maken were rushed to Jaipur ahead of the meeting amid a power tussle between Chief Minister Ashok Gehlot and Deputy Chief Minister Sachin Pilot.

Pilot, who is also the president of the state unit of the party, on Tuesday night claimed he has the support of 30 MLAs and the Gehlot government is now in minority.

The claim has been rejected by the Congress.

The party says 109 MLAs have already expressed support for Gehlot.

The Congress Legislature Party meeting was supposed to have begun at 10.30 am, but has been delayed.

Meanwhile, a meeting comprising of all Congress MLAs pledging their support to the state government, began in Jaipur.

Over 80 MLAs reached Gehlot's residence, the venue of the meeting.

Senior party leaders Ajay Maken, Randeep Surjewala and Avinash Pandey will conduct another meeting with the lawmakers at the Marriott Hotel later today.

State party in-charge Pandey had earlier claimed that 109 MLAs have so far signed letters of support for Ashok Gehlot to continue as the Chief Minister of Rajasthan.

Meanwhile, Pilot had it made it clear yesterday that he will not attend the meeting and in statement issued on Sunday he had claimed that the Ashok Gehlot government was in minority as more than 30 Congress and some independent legislators have pledged support to him.

Reacting to the development, senior BJP leader and National Vice President Om Mathur said that Congress is facing difficulties to retain their position of power in Rajasthan due to internal infighting and is instead blaming the opposition for it.

He also added that should there be any trouble in the power balance there, BJP is all set to form the new government.

Meanwhile, IT raids have reportedly been coducted at the houses of a dozen minor Congress leaders and supporters of the party in Rajasthan.

Most prominent names include, Rajiv Arora who is also a jeweller and close friend of CM Ashok Gehlot and Dharmendra Rathore who is a businessman in Jodhpur.

Officials said the raids have been launched early morning in Delhi, Jaipur, Mumbai and Kota.

At least 80 tax sleuths apart from police officials are part of the action, they said.

They said the department initiated action on the basis of inputs of huge cash transactions taking place and the business group's alleged links to these transactions.

Another entity in Rajasthan is also being searched, they said.

Official sources did not comment on reports claiming that the searches were linked to the current political crisis in the state.

The Congress has the support of 10 out of 13 independents, and other party MLAs like Rashtriya Lok Dal (1), which is its ally.

The Congress also considers Bhartiya Tribal Party (2) and CPI(M) (2) MLAs as their supporters.