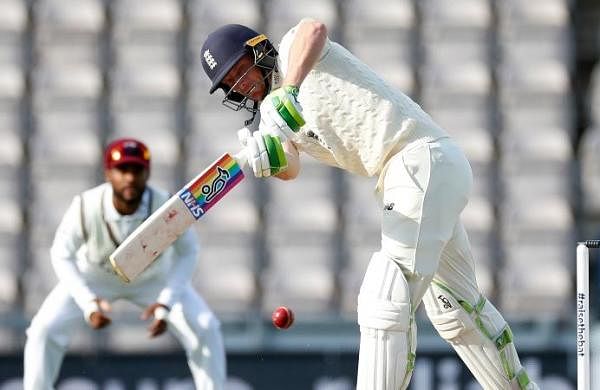 MANCHESTER: England head coach Chris Silverwood has thrown his weight behind under-fire wicketkeeper-batsman Jos Buttler ahead of the second Test against the West Indies beginning Thursday at the Old Trafford.

England are down 0-1 in the three-match series after West Indies pulled off a stunning four-wicket win at the Ageas Bowl in Southampton.

Buttler recorded scores of 35 and 9 in the two innings while his drop catch of Jermaine Blackwood proved to be costly as he ended up scoring a match-winning knock of 95 for the visitors.

"Jos (Buttler) looked brilliant in practice coming into the game. He just needs to go on and make those big scores now, doesn't he? He knows that," Silverwood was quoted as saying by Daily Mail.

"From our point of view it's just making sure he feels confident in the environment he's in. We'll give him the best chance to succeed and then if he has a day out and gets some runs the rest will be history," he added.

England gave their vote of confidence to Buttler ahead of the series by not including Jonny Bairstow in the squad. However, Silverwood reminded they still have back-up stumper Ben Foakes in the side who could come in if Buttler's problems persist.

"I'm not going to go down the road of putting Jos under pressure because I don't think that will help him,' Silverwood said.

"First and foremost we want to give him the best chance to succeed but, yes, we have a very good gloveman here in Ben Foakes."