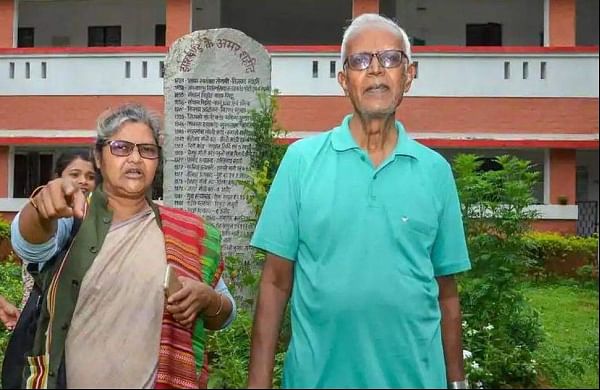 RANCHI: Jharkhand Janadhikar Mahasabha, a network of several people’s organisations and activists, has written Maharashtra Chief Minister Uddhav Thackeray appealing him to ensure all amenities and dignity to the under-trial activist Stan Swamy, who is currently lodged in Taloja jail of Mumbai.

The Mahasabha has also urged the Maharashtra government to arrest the actual perpetrators of the violence in the Bhima-Koregaon case and ensure a speedy trial so that the blatant attempts by NIA to target activists, lawyers, and intellectuals by building a false narrative of Maoist conspiracy, in this case, could be exposed.

The NIA had arrested the 83-year-old Jesuit priest Stan Swamy in the Bhima Koregaon case on October 8 in a case related to the violence which erupted at an event to mark 100 years of the Bhima-Koregaon battle on January 1 in 2018, leaving one dead and several others injured.

Alleging serious violation of basic rights of an elderly person with a disability, the Mahasabha stated that it was also the responsibility of the Maharashtra government to ensure amenities and dignity to the under trial activists.

“We appeal to the Maharashtra government to ensure all amenities including warm clothes, health support, and dignity to Stan Swamy considering his age and illness. Swamy is a valued and public-spirited citizen who has worked for Adivasi rights for decades in Jharkhand,” stated Mahasabha in its letter.

The Mahasabha also appealed to the Maharashtra government to arrest the actual perpetrators of the Bhima Koregaon case -- Milind Ekbote and Sambhaji Bhide (leaders of Shiv Pratishthan Hindustan and Hindu Ekta Aghadi) and ensure speedy trial.

The letter further added that it would expose the blatant attempts by the NIA to target activists, lawyers, and intellectuals by building a false narrative of Maoists conspiracy.

The Mahasabha, however, admitted that the jail authorities finally gave a sipper to Stan Swamy on November 29 after widespread condemnation from all quarters.

Swamy, who is suffering from various health issues, including Parkinson’s disease, had earlier filed a plea in the Special NIA court that he may be provided straw and a sipper, which allegedly was seized by the NIA during his arrest.