Entire Bihar is my family, serving people is my duty: Nitish Kumar 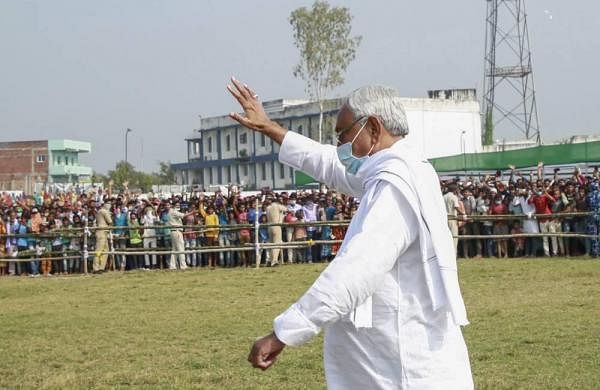 MADHUBANI: While addressing a public rally in Phulparas constituency on Sunday, Bihar Chief Minister Nitish Kumar lashed out at dynastic politics of the opposition and said that the whole state is his family.

"For others, wife, son, daughter and limited members are the families, but to me whole Bihar is my family. Serving people is my duty," he said.

"Bihar was in a pathetic situation. Lots of crime happened here. The development rate was almost zero. We controlled everything. We kept saying right from the beginning we'll go on the path of progress with justice," he said.

JD(U) has fielded Sheela Mandal from Phulparas to contest against Kripanath Thakur of Congress and Bonod Kumar Singh of the Lok Jan Shakti Party. In the last elections held in Bihar in 2015, Guljar Devi of JD (U) had won from this seat.

Since the National Democratic Alliance (NDA) candidate from the constituency is a woman, the Chief Minister did not forget to mention the work done by his government for the betterment of women.

"Women are getting their due respect. There was no female participation in public representation. We provided them a platform and chance... Development is not possible unless women get the opportunity to work shoulder to shoulder. Furthermore, we have done a lot for women's uplift," he said.

Bihar Assembly elections will be held in three phases on October 28, November 3, and November 7. Phulparas will go to polls on November 3. The result will be declared on November 10.