Faced many hardships due to internet issues: Pulwama's Basit Bilal Khan who is J&K's NEET topper 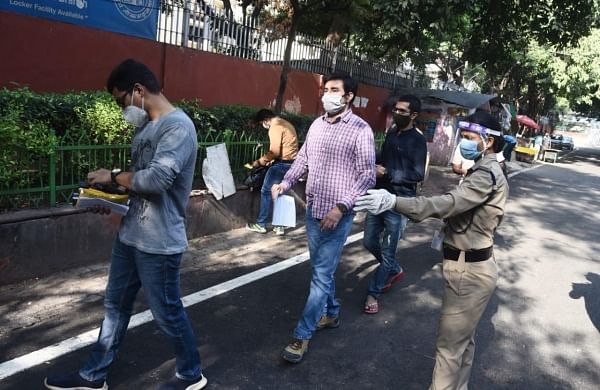 SRINAGAR: A teenager from militancy-infested south Kashmir's Pulwama district has topped the NEET examination from the Union Territory despite internet connectivity issues in most parts of the valley since over a year.

Basit Bilal Khan (18) secured 695 marks out of 720 in the NEET exam, the result of which was declared on Friday.

Khan, hailing from Ratnipora village in Pulwama, said while he worked very hard for the competitive examination, frequent internet outages and slow network speed created a lot of hardships.

"I am thankful to God for bestowing this success on me.

I am thankful of my parents who supported me always and also of my teachers who showed me a track and guided me and worked hard on me," he told reporters near a private study centre here where he studied for the exams.

"My family is very excited with the results as they had huge expectations from me.

But this is because of the hard work of my teachers and their polishing.

I am feeling proud now being the topper from Jammu and Kashmir," the ecstatic teenager said.

He said while the faculty at the study centre covered the syllabus wholly in time, the internet connectivity issues created a lot of difficulties for him and other candidates like him.

"We faced a lot of hardships because of internet connectivity issues. My teachers had prepared video tutorials for us, but it was very difficult to access them on 2G network."

"Obviously, the situation was challenging. But if you really want to crack this examination, then you find ways to work hard and if you work with dedication, then God will help you. I did my best and achieved success," he said.

Mobile internet often remains suspended in Pulwama district because of anti-militancy operations undertaken by security forces, while the speed of the internet has remained restricted to 2G since August last year when the Centre abrogated Article 370 of the Constitution.

The network speed has been increased to 4G in Ganderbal district in the Kashmir Valley and Udhampur district in Jammu region only so far.

Khan advised the candidates intending to compete in the examination to not waste time.

"They should utilise time and study and practice in such a manner that they do not have any regrets later," the 18-year-old said, adding that he used to take a lot of mock tests during the lockdown imposed in view of the COVID-19 pandemic.

A faculty member at the study centre said the students faced a lot of hardships due to 2G internet connectivity, but a mobile app which worked on low-speed internet helped to cross the hurdle.

"I am much happier today than I was when I qualified this examination. These students faced a lot of hardships due to low-speed internet network. It was not possible to access study material on 2G network," the teacher said.

"Then we contacted an app developer and he developed an app for us which worked on low-network speed. We reached our students through our app and we regularly communicated with them and sent across all the study material," he said.

The teacher said while he was proud of the achievement of all-India NEET topper Soyeb Aftab who secured 100 per cent marks, the conditions in Jammu and Kashmir were more difficult.

"If we compare the atmosphere he studied in with the situation here. That he did not face any internet shutdowns or speed restrictions. There is a narrow gap in his and Basit's marks, if Basit got such favourable conditions, then he will easily score full marks," he said.

The advisor enquired about his field of interests, strengths, difficulties and his approach to qualify the prestigious exam, an official spokesman said.

The advisor congratulated Bilal Basit Khan for qualifying the exam and topping from Jammu and Kashmir despite facing many odds and expressed hope he would inspire many other youths from the region to crack other prestigious exams in order to serve society in the best possible way so that their energy would be utilised for the development of the nation.

The advisor said J-K is full of fertile minds but the need is to provide them proper exposure to an environment where they would hone their skills to excel in their respective fields.

While congratulating the successful students of NEET examination, the NC president said there is no substitute to hard work and that perseverance and hard work are the key to success.

Farooq Abdullah said Basit Bilal Khan has proven that the youth of Kashmir were second to none in academic excellence and chasing dreams for a better tomorrow.

"If students like Basit can do it despite all challenges due to the prevailing situation, other students can do it as well.

I am sure students will take inspiration from him and bump up their efforts to achieve academic excellence," the MP added.

While congratulating the successful candidates, Omar Abdullah said it was elevating to see local youth cracking such prestigious exams despite various oddments, lack of resources and dearth of necessary exposure.