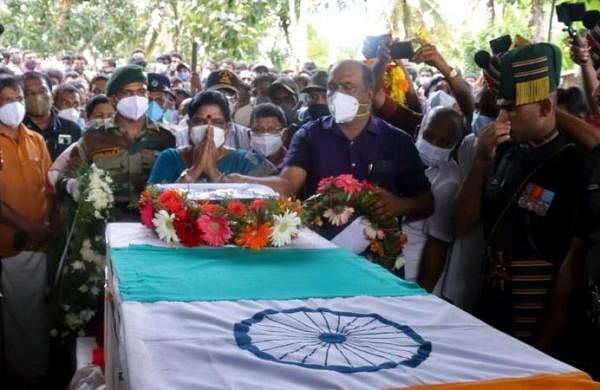 DEHRADUN:  As the news of martyrdom of Army soldiers Vikram Singh Negi and Yogambar Singh reached their home in Uttarakhand, family members still are in shock and disbelief. Both the jawans were killed in Nar Khas forest area during the counter-terrorism operation in Jammu and Kashmir’s Poonch district. While Negi, 26, was a resident of Village Viman Gaon, Singh, 27, hailed from Saankri village.

Singh, who returned to his posting in July after a month’s leave, has a one- year-old son. His wife Kusum Devi fell unconscious while his parents are in a state of shock. Janki Devi has been inconsolable after she lost her son in the line of duty. “This is like snatching away a family’s life. I don’t know how I will console my family members,” said Vasudev Singh, a kin at Saankri in Chamoli district.

Anand Singh Bhandari, gram pradhan of Sankari village,  said Singh joined the Army in year 2015.  “We all attended his marriage in 2018 and danced our hearts out. We were proud of him and now all that remains are memories,” the pradhan said. The body of the martyr reached Rishikesh and would arrive till late night or on Saturday morning.

Surendra Singh Negi, the uncle of rifleman Virendra Singh Negi, said Vikram joined the Army five years back.  “The information (of martyrdom) was received by his wife Parvati. It’s devastating. He had his whole life to live... It’s unfair how terrorism has cut such promising life short,” said the grieving uncle. Negi’s 18-month son is unaware that he will never get to know his father or meet him.  The Negi household, especially the  martyr’s wife, mother Birja Devi and 95-year-old grandmother Rukma Devi, are speechless as they struggle to come  terms with their loss.

Uttarakhand Chief Minister Pushkar Singh Dham condoled the loss of the two families.  “Our soldiers have made the  supreme sacrifice in the service of Mother India. Their sacrifice will never ever be forgotten. I pray to God to grant courage and patience to the families and all of us to bear the loss,” he said.