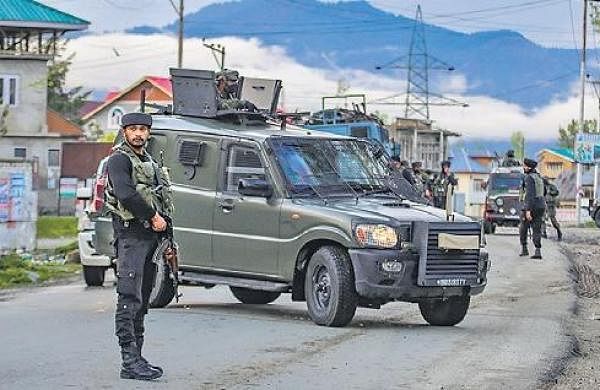 SRINAGAR: The family members of a civilian, who along with a CRPF jawan was killed in an encounter in Sopore in north Kashmir on Wednesday morning, have alleged that he was dragged out of his vehicle by the jawans and shot dead. However, police and CRPF have rejected the allegations and said he was killed in militant firing.

A CRPF spokesman claimed militants ambushed the 179 Bn CRPF party at Sopore at around 7.30 am by spraying bullets on them. While a CRPF jawan and a civilian were killed, three CRPF men were injured in the attack, the spokesman added.

The civilian, identified as 60-year-old Bashir Ahmad from Srinagar, was travelling in an Alto car along with his three-year-old grandson.

The death of the civilian left behind the searingly heartbreaking image of his three-year-old grandson sitting by the motionless body of his grandfather. The boy was later taken away from the spot by policemen.

Three videos of his family members, including of his wife and daughter, where they allege that Bashir Ahmad was dragged out of his vehicle and shot dead by CRPF men have gone viral on social media.

“He was not a militant. Why he was shot dead,” said his wife in one of the videos.

“He was taken from the vehicle and shot dead. (The Jawans) Did they not see that he was accompanying a three-year-old boy? They killed an innocent man,” she said.

However, police denied the allegations of the family members of the slain civilian, saying they were “not true”.

SP Sopore Javaid Iqbal told The New Indian Express that the family’s allegations were totally baseless. “They were not on the spot. Then how come they allege that he was taken out from the vehicle and killed,” he said adding, “They should not tell lies”.

The police official said the man, along with his grandson, had left the vehicle during the exchange of fire and might have tried to hide somewhere to escape bullets. “During this, he might have been killed”.

A CRPF spokesman also rejected the family's allegation. “His family was not on the spot. How can they level such allegations,” he said. “He was killed in the militant firing. He was hit by the bullets coming from the same side from where our CRPF jawans were also hit,” he said.