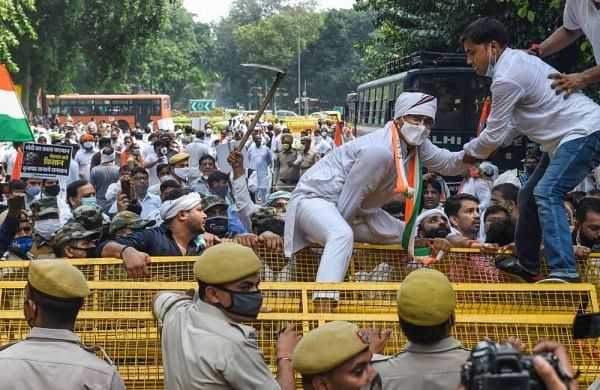 CHANDIGARH: The Punjab Congress Monday held protests across the state against the three crucial Central farm bills, alleging the proposed legislations would "ruin" the farming community.

Congress workers raised slogans against the BJP-led government at the Centre for bringing the "anti-farmer" Bills, and also burnt effigies of the Central government.

"These Bills will ruin farmers," he said, promising that his party would take every step possible to protect the interests of the farming community.

Jakhar also hit out at Punjab's opposition party Shiromani Akali Dal, saying it took a "U-turn" over the issue of the farm Bills after sensing there was anger among farmers against the proposed legislations.

"Earlier, they were trying to mislead farmers by saying that these Bills were in their interest," he said.

Jakhar also said he was happy that all farmer outfits have joined hands to oppose these Bills.

Farmers' outfits have given a call for 'Punjab Bandh' on September 25 in protest against these Bills.

In Hoshiarpur, state minister Sunder Sham Arora dubbed SAD leader Harsimrat Kaur Badal's resignation from the Union cabinet as a "political stunt" and asked why she did not quit the Modi-led government when the corresponding ordinances were brought in.

"We are with farmers," he said.

On Sunday, Rajya Sabha passed the Farmers' Produce Trade and Commerce (Promotion and Facilitation) Bill, 2020, and the Farmers (Empowerment and Protection) Agreement of Price Assurance and Farm Services Bill, 2020.

The bills were passed by Lok Sabha on Thursday.

A third bill is yet to be passed in Rajya Sabha.

Punjab Chief Minister Amarinder Singh on Sunday had said that his government would take the BJP and its allies, including the Akalis, to court over the new "unconstitutional, undemocratic and anti-farmer" laws of the Central government.

SAD chief Sukhbir Badal had urged the President not to sign the farm Bills and also requested him that they be returned to Parliament for reconsideration.

Farmers in some states including Punjab and Haryana have been protesting against these three Bills.

They have expressed apprehension that the three Bills would pave the way for dismantling the Minimum Support Price (MSP) system, leaving them at the "mercy" of big corporates.

Carrying placards and raising slogans against the Union government, the protesters led by J&K youth Congress president Uday Chib gathered at the Exhibition Ground in the heart of the city.

They also tried to march towards the main road but were stopped and pushed back by police, officials said.

Amid vociferous protest by opposition parties, Rajya Sabha passed the Farmers' and Produce Trade and Commerce (Promotion and Facilitation) Bill, 2020 and the Farmers (Empowerment and Protection) Agreement on Price Assurance and Farm Services Bill, 2020 on Sunday.

Demanding immediate revocation of the new bills, the Congress youth leader claimed that the new legislation would make the farmers slaves of the capitalists in the absence of Minimum Support Price (MSP).

Delhi Congress leaders and workers marching towards Parliament on Monday to protest against the new farm bills were detained by police.

Amid vociferous protest by opposition parties, Rajya Sabha passed the Farmers' and Produce Trade and Commerce (Promotion and Facilitation) Bill, 2020 and the Farmers (Empowerment and Protection) Agreement on Price Assurance and Farm Services Bill, 2020 on Sunday.

The protesters led by Delhi Congress president Anil Kumar were marching towards the Parliament building but were stopped and detained by the police on R P Road, the party said.