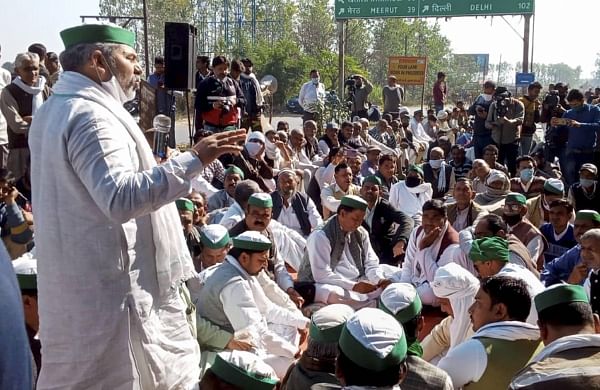 LUCKNOW: Farmers on Friday staged demonstrations at some places in Uttar Pradesh leading to traffic jams on roads, officials said.

Protesting against the Centre's new farm laws and the police action on the agitating farmers, the activists of Bhartiya Kisan Union (BKU) blocked the Delhi-Dehradun National Highway at Nawla Kothi in Muzaffarnagar district and also staged sit-ins in Meerut and Baghpat.

Due to heavy deployment of police personnel, however, the situation remained under control as the administrative machinery was already on alert after a call for holding the protests was given by the BKU.

Verma said farmers will soon be staging a protest at the Sadar tehsil in support of their demands.

"We will continue our struggle till the time our demands are not met. We are ready to get arrested," he said.

ADG Law and Order, Prashant Kumar said police personnel have been deployed in view of the farmers' call to ensure law and order is maintained in the state.

There was no impact of the farmers' protest in Lucknow, Kumar said.

However, as the Delhi-Haridwar stretch on the Delhi-Dehradun Highway was shut due to the protest, long queues of vehicles were witnessed.

In Baghpat, BKU activists blocked traffic on the Sonipat Highway using tractors and raised slogans against the new farm laws.

The BKU had given a call to stage protests on the national highways of the state after which traffic routes had been diverted in the district.

SP Baghpat, Abhishek Singh said magistrates and police in strength have been deployed in Nivada area which shares border with Haryana to ward off any incident.

The local farmer leaders have also been approached in this regard, he added.