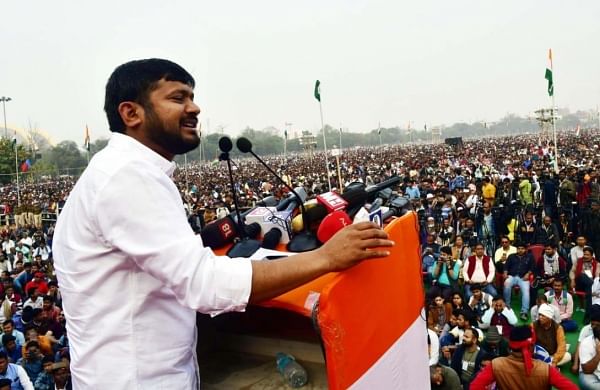 PATNA: CPI leader and former president of JNU Students' Union Kanhaiya Kumar called upon Indians to consider the fight against CAA, NRC, and NPR as the "second freedom struggle".

Addressing a crowd at the 'Samvidhan Bachao rally' in Patna today, he claimed that a party in Delhi added fuel to the fire of hatred to serve its political interests.

"But in Bihar, we will not allow such party to move even an inch in fanatic and religious politics. The people now want to save the Constitution to save the nation from falling in the state of anarchy," he said.

India needed fearlessness of Bhagat Singh, the equality of BR Ambedkar and the unity of Mahatma Gandhi to fight against the "tyranny of fascists forces," he added.

Unemployment, poverty and a plethora of other problems are ruining the lives of common people but the BJP led NDA government in India was fanning a divisive policy based on religious lines, he alleged.

Tushar Gandhi, grandson of Mahatma Gandhi, was also present at the rally and said that the CAA-NPR -NRC combine equalled to attacking Gandhi's ideas and ideologies with "three bullets".