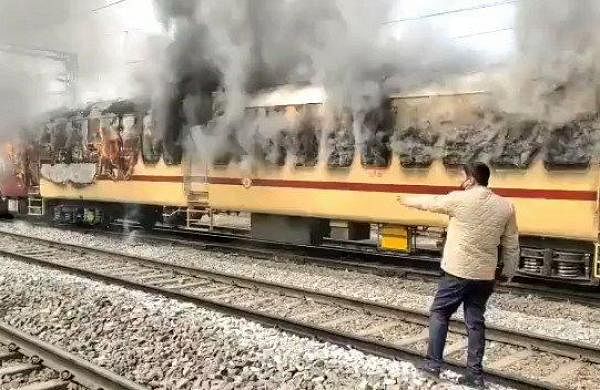 PATNA: A First Information Report (FIR) has been registered against a private teacher, 16 students and some unidentified persons on Thursday, January 27, 2022, for inciting the mob that indulged in vandalism, set trains on fire and caused extensive damage to the railway property in Bihar in the last three days.

The police complaint has been lodged at Patrakar Nagar police station in Patna on the statement of some protestors who were taken into custody during violent protests on Monday evening.

The police recorded their statements in which the protestors revealed the name of the private teacher, Khan Sir. Khan Sir, who gained popularity for his unique style of teaching, is said to have gone underground after he came to know about the case registered against him and five other teachers of his private coaching institute. They have been accused of orchestrating the agitation by job aspirants.

The protests were held across the state to press for the cancellation of the Railway Recruitment Boards' Non-Technical Popular Categories (NTPC) examination. As per the FIR, Khan Sir, a popular YouTuber, and his colleagues have been charged with inciting the students to protest.

(THE NEW INDIAN EXPRESS)
117 Days ago