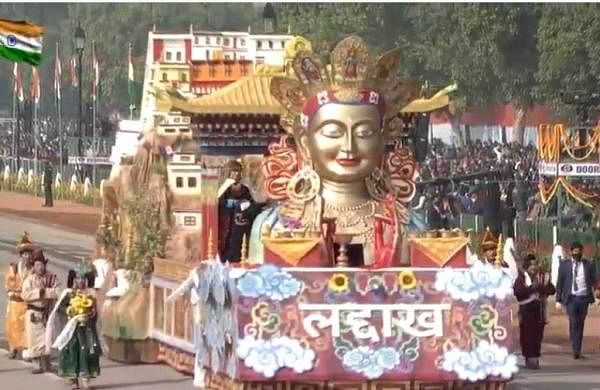 NEW DELHI: In a first, the tableau of the Union Territory of Ladakh, which came into existence in 2019 following the abrogation of Article 370, was displayed in this year's Republic Day parade.

The tableau highlighted the 'Vision' for Ladakh to be carbon neutral and exemplary for the world.

It showcased the future prospects and development of green Ladakh by using natural resources and generating horticulture produce in apricot and organic farming, besides development of tourism.

The tableau displayed composite culture and communal harmony besides art and architecture, languages and dialects, customs and costumes, fairs and festivals, literature, crafts and music of Ladakh.

The Indian Astronomical Observatory located in Hanle near Leh, one of the world's highest sites for optical, infrared and gamma-ray telescopes, was also featured in the tableau.

In August 2019, the central government scrapped the provision of article 370, bifurcating the state into two Union Territories -- Jammu and Kashmir and Ladakh.