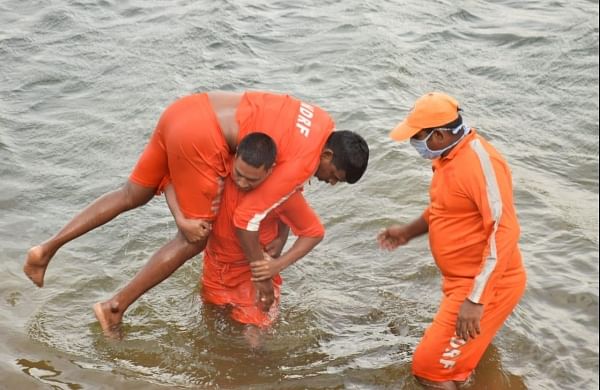 NEW DELHI: The National Disaster Response Force (NDRF) has deployed more than 90 teams for flood rescue works across the country with a "strong focus" on sanitisation of men and material in view of the ongoing COVID-19 pandemic, a senior official said on Saturday.

Union Home Minister Amit Shah had reviewed the preparedness for monsoon rains and floods in the country on Friday at his office in North Block and directed officials to develop a well-planned scheme to reduce damage and casualties.

An NDRF team for flood rescue has about 45 personnel and it is equipped with gadgets and inflatable boats.

The DG said some new strategies have been put in place for rescue drills and rescuers in view of the coronavirus pandemic.

The deployment of NDRF teams will take place with full preventive and protective precautions with a strong focus on sanitisation and hygiene of men and material, Pradhan said.

He said the force has written to the chief secretaries and special relief commissioners of states seeking ample space for its rescue teams and personnel in view of the Centre issued COVID-19 guidelines related to physical distancing, sanitisation and hygiene.

Another official said the states where NDRF teams are deployed for flood rescue works will also carry their own temperature check gadgets, masks, sanitisers and basic medicine kit.

About 60 NDRF personnel who worked during cyclone 'Amphan' in West Bengal last month were infected with the coronavirus during the course of their work.

However, almost all of them have now been cured, the official said.

"A unified disaster control room will be run by us and round-the-clock monitoring of all teams and their work will be done as usual from the NDRF headquarters in Delhi," the DG said.

The home minister, as per an statement issued on Friday, had sought priority action on finding permanent solutions to the perennial flood problem in states like Bihar, Uttar Pradesh and the northeastern states.

He emphasised on better coordination between different agencies to have a permanent system for forecasting floods and rise in water levels in major catchment zones and areas of the country, it said.

Shah also directed the Ministry of Jal Shakti and Central Water Commission (CWC) to review and assess data on real storage capacity of major dams with a view to ensure timely release of water and prevention of floods.

A total of 40 million hectares of area in India is prone to flood in which Ganga and Brahmaputra are main flood basins and Assam, Bihar, Uttar Pradesh and West Bengal are most flood-prone states, the statement said.