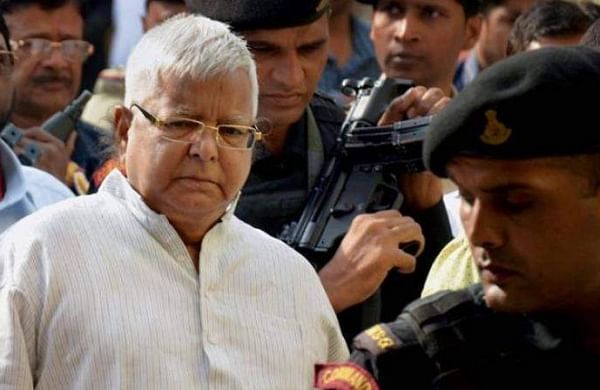 RANCHI: In a major relief to RJD chief Lalu Prasad Yadav, the Jharkhand HC on Saturday granted him bail in the fodder scam case RC 38A/96, related to illegal withdrawal Rs 3.13 crore from Dumka Treasury, on the grounds of completing half of his sentencing.

After his bail application on February 19 was rejected as he fell short by one month and 17 days in completing half of his sentence, Yadav once again had approached the court seeking bail in the case.

“Since half of the sentencing had already been completed in Dumka treasury case, the court allowed the bail application filed by Lalu ji. Despite the opposition by CBI counsel, the court turned down their arguments saying that they can raise their points during the final appeal,” said Yadav’s advocate Anant Kumar Vij. It is expected that he will come out of jail within a week as it will take some time to fulfil all the formalities, he added.

According to the advocate, Yadav has been asked to furnish two bail bonds of Rs 1 lakh each in the lower court.

“In addition to that, he will have to deposit his passport to the lower court and cannot go out of the country without permission of the court,” said the advocate. Lalu ji has also been asked not to change his address without any prior information to the court, he added.

After being convicted by a Special CBI Court in Ranchi on December 23, 2017, in the second fodder scam case involving the illegal withdrawal of Rs 89.27 lakh from Deoghar treasury, the RJD chief was lodged in Birsa Munda Central jail in Ranchi but was shifted to RIMS on August 29, 2018, due to his deteriorating health condition.

The 72-year-old, after being diagnosed with symptoms of pneumonia, was shifted to AIIMS in January this year on the recommendation of an eight-member medical board, set up to look into his health condition. Yadav is also a chronic patient of hypertension, diabetes, heart and kidney ailments.