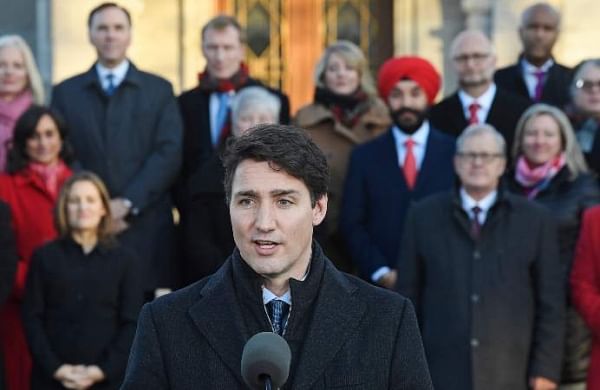 OTTAWA: For the first time, a Hindu woman lawmaker has been inducted into a Canadian Cabinet as Prime Minister Justin Trudeau unveiled his "strong and skilled" team of 37 ministers which also includes three Sikh MPs.

Trudeau unveiled his Cabinet with the induction of seven new faces, including Anita Anand, a former law professor at the University of Toronto. The three other Indian-origin MPs, all Sikhs, inducted into the Cabinet are Navdeep Bains (42), Bardish Chagger (39) and Harjit Sajjan (49).

The Liberal's minority government headed by 47-year-old Trudeau was sworn in on Wednesday at the Rideau Hall in Ottawa. Anand, who is in her early 50s represents Oakville in Ontario, is among the two newly-elected ministers.

She was elected to the 338-seat House of Commons for the first time in the October federal elections. She takes over the public services and procurement portfolios, which oversees billions of dollars in public spending, including the purchase of military hardware, the Toronto Star reported.

She will also assume responsibility for Phoenix, the computerised pay system that has disrupted compensation for thousands of federal civil servants, it said.

Sajjan, a former Vancouver police detective and a lieutenant-colonel in the Forces, remains the minister of national defence, the Canadian Broadcasting Corporation reported.

Bains was named as the minister of innovation, science and industry. He represents MississaugaMalton district in Ontario and retains the innovation and science files but his ministry has been restructured to include industry, the report said.

Meanwhile, Chagger, who served as the government House leader in the last Parliament, will now not only take on diversity and inclusion, but also Trudeau's responsibility for the youth, it said.

However, Amarjeet Sohi who was part of the 2015 Cabinet is not returning this time after his defeat in the election.

"I'm very excited today to be able to get down to work the way Canadians asked us to in this last election. To pull together the country, focus on issues of economic growth for the middle class, to fight climate change, and to keep Canadians and their communities safe. That is our focus, and this is the team to do that," Trudeau was quoted as saying by the CTV news.

To reach the majority of 170 in the 338-seat House of Commons, the Liberals are short of 13 members. This means that meaning in order to pass votes and advance their agenda, the Liberals must gain the support of the opposition MPs, the CTV reported.