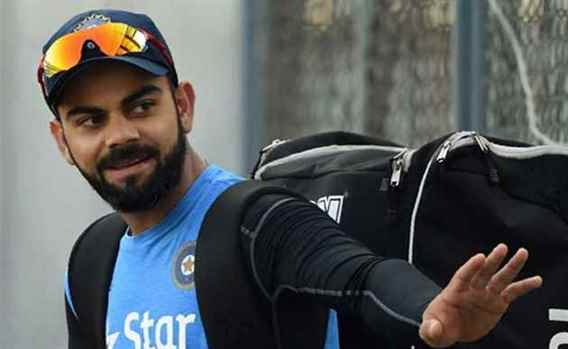 Indore:  India skipper Virat Kohli on Wednesday lent support to Glenn Maxwell who has taken a break from international cricket on account of mental health issues, saying what the Australian all-rounder has done by accepting the concern is "remarkable'.

Maxwell, who was part of the playing XI in the first two T20I matches against Sri Lanka last month, took a break for an unspecified period to deal with his mental problems. He was followed by young batsman Nic Maddinson who also opted out of the three-day tour game against Pakistan.

"You know when you get to the international stage, every player that's in the squad needs that communication -- that ability to speak out. I think what Glenn has done is remarkable," Kohli told reporters on the eve of the first Test against Bangladesh starting at the Holkar Stadium.

"He set the right example for cricketers all over the world. If you are not in the best frame of mind, you try, try and try, but as human beings, you reach a tipping point at some stage or the other and you need time," he added.

The 31-year-old admitted that he went through the same phase in 2014 during the England tour where he struggled badly to score runs.

"I have gone through a phase in my career where I had felt that it was the end of the world. I just didn't know what do and what to say to anyone, how to speak, how to communicate," Kohli said. The Indian skipper said the issue of mental health needs to be discussed in order to understand what a player is going through.

Kohli feels that if a player doesn't have the mental capacity to deal with off-field stuff, he should be given "space" to deal with it. "I couldn't have said that I am not feeling great mentally and I need to get away from the game. Because you never know how that's taken," he said.

"Not to say that you give up but just to gain more clarity, you tend to take a bit more space which, in my opinion, is quite acceptable and quite a nice thing to do when you are not able to carry on anymore."

"I think these things should be respected and not taken in a negative way at all. It's just not having the capacity to deal with things that can happen to any person to any walk of life. I think it should be taken in a very positive way," he added.

India is currently placed at the top of the ongoing World Test Championship with 240 points. They have won all their five games so far in the competition and will be looking to extend their lead at the numero uno spot when they take on Bangladesh in the two-Test series.