God is easier to find than a job in Bihar: Migrant workers who returned to state now face livelihood woes 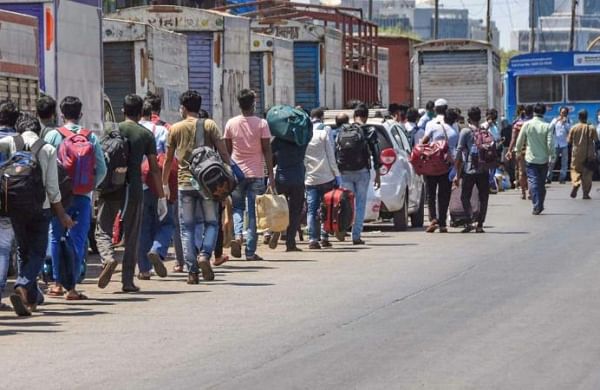 PATNA: If you thought the economy is all about demand and supply, think again against the backdrop of the post-lockdown scenario in this Bihar village.

“Sir, ham log yaha bhagwan ko pa sakte hai, par rojgar nahi,” (Sir, we can get God but not employment). This is what Ajoy Kumar (25), a skilled iron-casting worker, had to say when asked if he had a job, at Mile-Pakri village, about 35 km from Patna, in Vaishali district.

Ajoy is among 150 migrant labourers who returned to the village from as far as Tamil Nadu, Punjab, Delhi, Gujarat and Haryana following the Covid-19 lockdown.

The village is part of the Raghopur Assembly segment in Vaishali district, represented by former deputy chief minister and RJD’s chief ministerial candidate Tejashwi Yadav (Lalu’s son) for state polls due later this year. Most of the aged villagers are banana cultivators, while youngsters go outside the state for livelihood.

Brick-kiln owner Rakesh Kumar says he hired some of the migrant labourers when they did not find work elsewhere.

Mintu Kumar (35), an auto repair mechanic, was among scores of workers who returned from Gujarat’s Surat and other cities. He says he sells ‘golgappa’ on a cart in the area.

“We are in a strange situation where work is hard to find for so many labourers like me. So, I thought it is better to work as a vegetable or ‘golgapa’ vendor than wait for a job,” he said.

Ditto Dheeraj Kumar (40). He returned to the village from Delhi, and though a skilled construction worker, he has no job. He says there are more than 100 others, who are masons and carpenters, but none of them has got a matching employment.

Arun and Vinay Kumar of neighbouring Bidupur village say they were hired by a private contractor who pays them Rs 200 per day.

The reality of joblessness is stark in many villages: migrant workers simply kill their time playing cards or gossiping.

“We have become nikkamah (useless),” says Vijay Kumar Choudhary of Mahnar village. He refused to be photographed while playing cards. Villagers say they have not been given any work under MGNREGA or other government schemes.

According to official figures, around 25 lakh migrant labourers returned to Bihar following lockdown. The government claims to have completed skill mapping of over 20 lakh such workers so that they could be given employment as per their skills.

An official statement last Thursday claimed that more than 10 crore man-day works have been created under various government schemes since lockdown.

On June 20, the Centre launched a Rs 50,000 crore job scheme for returnee migrants in 116 districts in six states.

As many as 12 Union ministries pooled 25 works for the scheme. Yet, jobs appear to be scarcely available in Bihar.