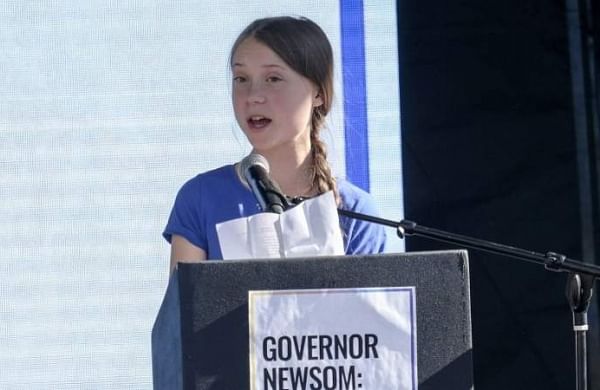 THE HAGUE: Swedish teen activist Greta Thunberg was awarded an international children's peace prize on Wednesday, for her work in the struggle against climate change which has resonated with schoolchildren across the world.

Cameroonian peace activist Divina Malorum, aged 15, also received the International Children's Peace Prize, awarded by the Dutch KidsRight organisation, which has been handing out the prize since 2005.

Thunberg could not accept her award in person at the ceremony in The Hague because she is crossing the Atlantic by boat on her way to an international climate conference in Madrid.

However, she sent a message saying she was "incredibly grateful and honoured for this prize".

The 16-year-old climate campaigner left the United States in mid-November, hitching a ride to Europe aboard a catamaran to attend a UN climate summit in Madrid in early December.

Thunberg rose to international prominence last year when she founded the "school strikes for the climate" movement. Tens of thousands of children around the world have now got involved.

"The climate crisis is the peace issue of our time," said German climate activist Luisa-Marie Neubauer who picked up Thunberg's prize on her behalf.

"We took on the streets for action and the truth is, today after one year of striking, the life of every child on this planet is threatened," she added, criticising the inaction of world leaders on the issue.

Divina Malorum was awarded her prize for her "peaceful struggle" against the Boko Haram jihadist group. "In Cameroon and Africa, when talking about peace-building, children are forgotten by the decision-makers," she said in her acceptance speech.

"I invite my fellow children around the world to raise their voice." The prizes were handed out by Indian children's rights activist and 2014 Nobel Peace Prize Laureate Kailash Satyarthi.

The children's peace prize is linked to a 100,000 euro grant which is invested in projects linked to the winners' causes. Previous winners of the award include Malala Yousafzai, a Pakistani schoolgirl who campaigned for girls' right to education.