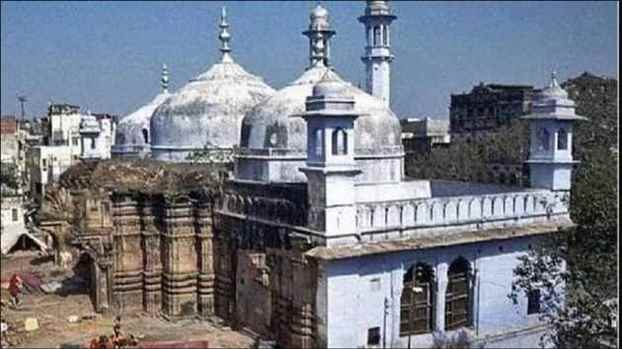 VARANASI: A Varanasi Court on Monday dismissed a plea of the Anjuman Islamia Masjid committee challenging the maintainability of the suit filed by five Hindu women seeking worshipping rights in the Gyanvapi mosque compound.

District Judge AK Vishvesh delivered the verdict in the Gyanvapi Shrinagar Gauri dispute case and posted the matter to further hearing on September 22.

"The court rejected the Muslim side's petition and said the suit is maintainable. The next hearing of the case is on September 22," said Advocate Vishnu Shankar Jain, representing the Hindu side in the Gyanvapi mosque case.

"It's a win for the Hindu community. The next hearing is on Sep 22. It's a foundation stone for the Gyanvapi temple. Appeal to people to maintain peace," said Sohan Lal Arya, petitioner in the Gyanvapi case.

Earlier, the Hindu side had said that they will seek for Archaeological Survey of India (ASI) survey and carbon dating of 'Shivling' if the judgment comes in their favour.

Speaking to ANI, Advocate Vishnu Shankar Jain, representing the Hindu side said, "Today the court will deliver its judgment on the maintainability of the suit. 1991 Worship Act applies in our favour. If judgment comes in our favour, then we will seek for ASI survey, carbon dating of Shivling."

Another lawyer, representing the Hindu side, Sohan Lal Arya said that the verdict will prove to be the first day of planting the foundation stone of Kashi Vishwanath.

"Moreover, this day is going to be a very happy day for the Hindu community of the world. Court will give its verdict from 2:00 pm and we have offered prayers for the 'darshan' of Lord Shiva in the morning. After the verdict, we will have 'darshan'. After the verdict comes in our favour, the people of Kashi celebrate by ringing bells and clapping. The people of Kashi will work to awaken the Hindu society," said Sohan Lal Arya.

The petition was filed by five women seeking permission for daily worship of Hindu deities whose idols are said to be located on an outer wall of the Gyanvapi mosque, which is located close to Kashi Vishwanath temple.

After the videography survey claims were made by the Hindu side that a structure, resembling a Shivling was found in the mosque complex but the Masjid committee contested that it was a fountain and not a Shivling.

"Several sculptures of gods and goddesses alongwith other structures related to Hindu belief were seen in the Gyanvapi Mosque in Varanasi," said advocate Ajay Kumar Mishra, who was appointed commissioner by Varanasi court to survey the Gyanvapi-Gauri Shringar complex but was later removed for leaking the information.

The report by Mishra also mentioned that the three-four sculptures with Sindoor marks and 'Choukhat' like stone slab are believed to be 'Sringar Gouri'.

However, the Anjuman Intezamia Masjid Committee has said the Gyanvapi mosque is a Waqf property and has questioned the maintainability of the plea.


Madan Mohan Yadav, a lawyer of the Hindu side, had claimed that the mosque was constructed after demolishing the temple.

According to the petitioners, a self-styled Jyotirling of Lord Vishwanath in Kashi is in the mosque complex.

The petitioner also claimed that in 1669, Mughal Emperor Aurangzeb had destroyed a portion of the Kashi Vishwanath temple and had built the Gyanvapi Mosque.

The petitioner wants the court to declare that Muslims have no right to occupy the Gyanvapi mosque and that their entry be banned.

Meanwhile, the defence lawyer said that there was no temple in the Gyanvapi complex and the mosque is standing on the site from the beginning.

Notably, the Supreme Court on July 21 said that it will await the Varanasi district judge's decision on the Gyanvapi mosque committee's application.

The SC bench then posted the matter for further hearing in the first week of October after the outcome of the proceedings before the district judge.

The Supreme Court on May 20 transferred the case from a civil judge (senior division) to a district judge, saying considering the "complexities and sensitivity" of the issue, it is better if a senior judicial officer having an experience of over 25-30 years handles this case.

The bench also said that no manner of restriction should be imposed on Muslims entering the mosque to offer namaz or religious observances.

The top court had made the observation that the process to ascertain the religious character of a place of worship is not barred under the Places of Worship Act of 1991.

SC judgement came after the commission appointed by a district court to conduct a video surgery of the Gyanvapi Mosque complex submitted its report on May 19.

The top court had ordered that its interim order passed on May 17 -- to protect the area where the Shivling was found and access to Muslims for namaz -- shall continue in operation till the maintainability of the suit is decided and thereafter for eight weeks to enable parties to pursue legal remedies.

It had said that District Judge should decide the maintainability of the civil suit in the Gyanvapi-Kashi Vishwanath on priority as sought by Committee of Management Anjuman Intezamia Masjid Varanasi.

The matter had reached the Supreme Court on a petition filed by the Mosque Management Committee, which challenged the civil judge's order of filming inside the mosque.

The order permitted inspection, survey, and videography of the mosque's complex to collect evidence about the alleged existence of idols of Hindu deities inside the mosque, which is adjacent to the Kashi Vishwanath Temple.

The petitioners said the filming goes against the Places of Worship Act of 1991, which maintains the religious status of any place of worship as of August 15, 1947.

However, after the survey, the lawyers representing the Hindu side claimed that a shivling was found at the mosque premises. They filed an application for the protection of the shivling, whereupon the civil judge directed the district magistrate, Varanasi, to seal the area where the shivling was sighted. It also directed the deployment of the CRPF to protect the sealed area and prohibited people from entering it.
(IMPUT FROM THE NEW INDIAN EXPRESS)